Alumnus shares story of succeeding with ADHD and dyslexia 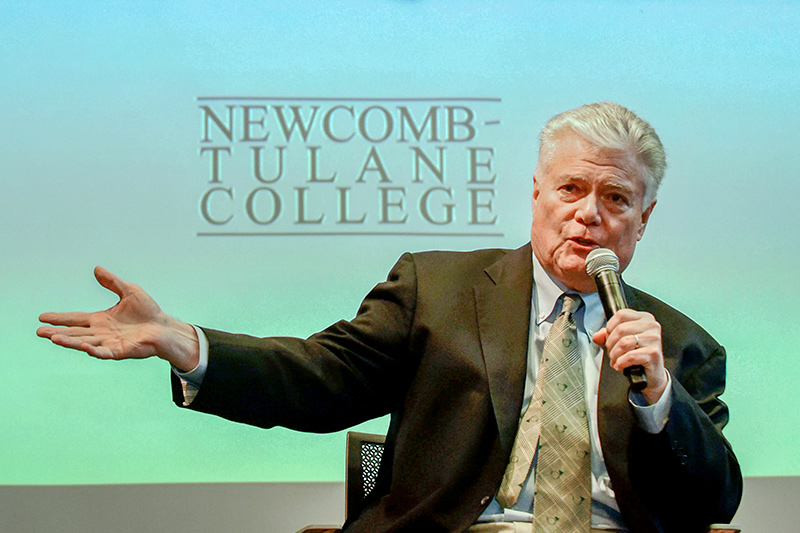 Ned Hallowell, MD, a 1978 graduate of Tulane School of Medicine, presented a talk Wednesday titled, “The World of ADHD in 2018: 40 Years After I Left Tulane, and the Enormous Debt I Owe the School.”

That debt, he explained, was for the many lessons he’d learned as a Tulane student and while living in the city of New Orleans.

“I immediately felt at home. There was something about this city that was so welcoming,” said Hallowell. “The time I spent here was really four of the most important years of my life.”

“I see it as a trait, that if managed, becomes an asset.”

Hallowell, a psychiatrist known for his New York Times best-seller Driven to Distraction, hosts a podcast by the same name and is considered an expert in his field. His talk was part of the John J. Witmeyer III Dean's Colloquium series, which brings distinguished alumni to campus to inspire students and show how Tulane impacted their extraordinary successes.

“Dr. Hallowell’s work aligns closely with the efforts of Tulane Success Coaching and the Goldman Center for Student Accessibility, and is especially relevant for students with learning differences and for faculty and staff working with students with learning differences,” said Trina Beck, assistant dean of Newcomb-Tulane College. “Even more broadly, Dr. Hallowell’s work addresses issues that many of us confront on a daily basis, from worry to the constant demands of an overloaded schedule.”

As a person who manages his own ADHD and dyslexia, Hallowell focuses on learning how these differences should be properly diagnosed and treated.

“I see it as a trait, that if managed, becomes an asset,” said Hallowell, who also met with Tulane students earlier in the day for a lunch-hour discussion titled “Let's Talk Failure: A Learning Perspective on Growing Resilience.”

This event was sponsored by Newcomb-Tulane College, the Goldman Center for Student Accessibility, Tulane Success Coaching and Tulane School of Medicine.