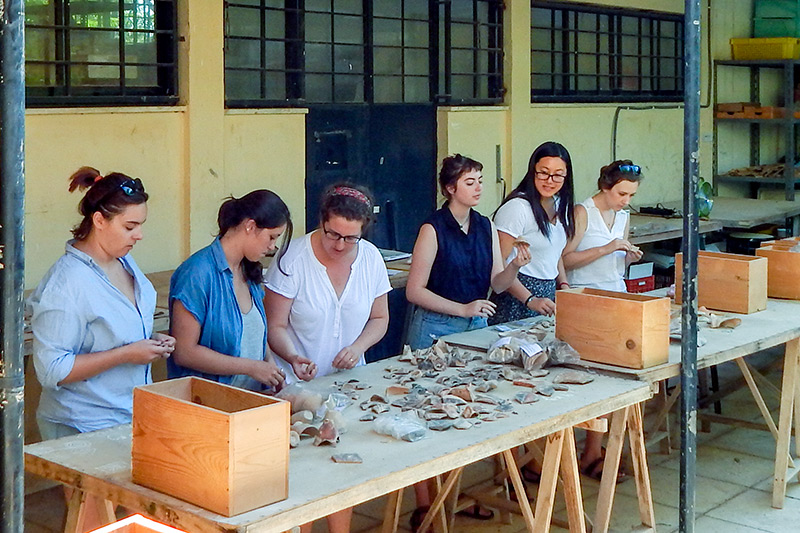 Tulane School of Liberal Arts professor Emilia Oddo, third from left, works with a team of undergraduate assistants in Crete during the summer. The team studied and cataloged pottery sherds excavated from the House of the Frescoes in the 1920s. (Photograph provided by Emilia Oddo)

For more than 80 years, 19 boxes of Minoan pottery sat in storage on the Greek island of Crete. Arthur Evans, the archaeologist who excavated them, died in 1941 without publishing any work about them.

Tulane School of Liberal Arts assistant professor Emilia Oddo was ready when the British School at Athens contacted her about studying Evans’ sherds from the House of the Frescoes at the Knossos palace site. Having already done other archaeological work on Crete, Oddo was excited for the chance.

“Working in the field, being able to work with antiquity, in a way spoke to me.”

It was also an opportunity to engage the five undergraduate students who accompanied her to Crete this summer. While in Crete, they washed, photographed, dated, and described the shape and decoration of the almost 2,000 sherds. The Center for Engaged Learning and Teaching, the Department of Classical Studies, Newcomb College Institute and Newcomb-Tulane College helped fund the students’ travel costs.

Oddo said students usually get to excavate in the field rather than process sherds, so Knossos offered a significant opportunity.

The experience may have helped redefine archaeology for them.

“It really opened up my perspective about the discipline and the work archaeologists do,” said anthropology and classical studies senior Francesca Luria.

“Working in the field, being able to work with antiquity, in a way spoke to me — I realized that this is what I wanted to do,” added senior Chelsea Morgan, who plans to go to graduate school after earning a degree from the School of Liberal Arts.

Luria found a way to personalize her month-long experience on Crete. “On my own, I conducted research for the identification of ceramic sets in our assemblage, particularly from three rooms within the structure [often referred to] as the ‘Minoan Hall,’ ” she said. “From the information we amassed as a group, I was able to isolate patterns in their form and contexts across the rooms. I was able to assess the shapes and their corresponding decorations in order to understand these patterns and place them in the larger context of the House of the Frescoes.”

Oddo said she will return to Crete next summer to continue the project.

Like this story? Keep reading: Greek pottery holds clues to life long ago