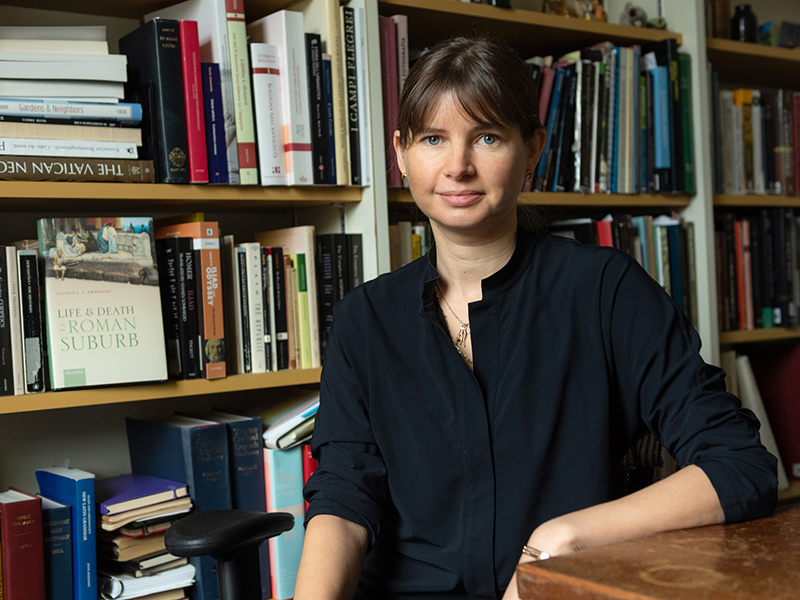 Allison Emmerson, archaeologist and associate professor in the Department of Classical Studies at the School of Liberal Arts. (Photo by Rusty Costanza)

Much research has been done and countless books have been written about the vast Roman empire and Roman society, resulting in ideas that have been accepted and passed along throughout history. However, at times a researcher emerges who questions standard thought and digs deeper for answers. One such scholar is Allison Emmerson, archaeologist and associate professor in the Department of Classical Studies at the School of Liberal Arts.

In early January, Emmerson was awarded the prestigious James R. Wiseman Book Award by the Archaeological Institute of America (AIA) for her book, Life and Death in the Roman Suburb, published by Oxford University Press. The AIA is the premier archaeological organization, not only in the U.S. but internationally, and being chosen for this award is one of the highest honors a researcher can receive in the field.

Emmerson’s book introduces a new paradigm, challenging the idea presented by past scholarship that the Romans were uncomfortable with the dead and as a result kept the dead outside the city, away from the living within the city walls.

“I'm a person who works both on cities and on tombs. What I found when I was writing my dissertation was that the city was clearly outside the walls too, because the tombs are among the houses, shops, restaurants, are mixed in with their public fountains and shrines. I think the idea of this strict separation — the fear that Romans had for the dead — is a modern idea that's been applied to the Romans and it's not actually there in ancient evidence. They were living very closely with the dead and the dead are really a part of the city,” Emmerson explained.

Emmerson attributes the depth and scope of Life and Death in the Roman Suburb to the time she spent in Rome conducting research after winning the Rome Prize, a fellowship with the American Council of Learned Societies and a Carol Lavin-Bernick Faculty Grant from Tulane.

“Those were completely integral; it wouldn't be the book it is without the grants which allowed me to take three semesters of leave to do research. I spent the academic year of 2018–19 at the American Academy in Rome, part of a group of 30 artists and scholars. We all lived together, ate our meals together, explored the city together; we were immersed in this big mix of inspiration and projects.  It was incredible and changed the book entirely,” Emmerson said.

Emmerson’s new approach comes from her unique focus and perhaps from her very human engagement and initial interest in the field. As a child, she was fascinated with history and lost civilizations but had no idea what she would pursue as a career. During her senior year of high school, her guidance counselor asked about her educational plans; she choose archaeology from a poster on the wall. Emerson then became a Classics major in college, learned Latin and Greek, and continued her graduate education at the University of Cincinnati, where she earned a PhD in Classical Archeology in 2013.

Emmerson hopes to bring to the surface those people and areas of Roman civilization that have been neglected by past scholars. “The main thing about my work is that I am always interested in the edge, the parts of the ancient world that need new light to shine on them, that are locked in the shadows. I research garbage and recycling. I'm interested in the poor and the enslaved and people whose voices aren't really left behind in a literary record. I always approach the past as if it is as fully complex as the present because it absolutely was. That's always what I'm communicating to my students — we tend to think of the past in these kind of paper-doll ways, we see a certain period and we sum it up in our mind as one thing — but humans are complicated creatures.”