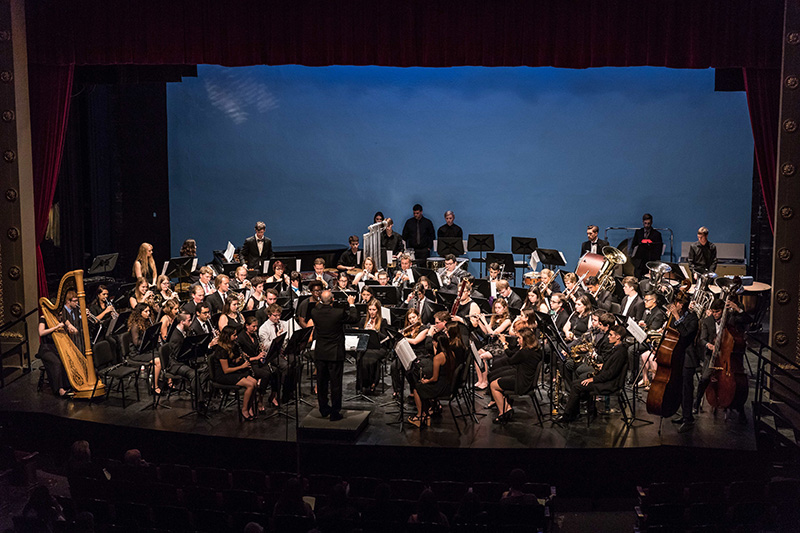 The Tulane Concert Band, under the direction of Barry Spanier, will perform in two concerts this spring. (Photo by Zack Smith)

The Tulane Concert Band will celebrate New Orleans’s tricentennial anniversary with a musical tribute during the annual spring concerts.

Music Under the Oaks, held at Newman Bandstand in Audubon Park, will be first in the series on April 15 followed by a performance in Dixon Hall on April 25 following the “Friends of the Band” dinner.

The dinner is hosted in the Lavin-Bernick Center on the uptown campus for alumni, donors and other friends to celebrate the band with a sit-down buffet at 5:30 p.m.

The band’s repertoire for this spring’s concerts includes decades of influence that the world has had on New Orleans and vice versa. The concert is divided into three parts––the first reflects the French influence on New Orleans, the second features classical music from three centuries, and the third comprises six songs about rivers in honor of the Mississippi River. Two traditional New Orleans favorites close the show.

“We’re here because of the Mississippi River. That’s how New Orleans was founded,” said Tulane director of bands Barry Spanier. “We wanted to reflect that in the repertoire.”

This year is the first time that the band has performed in Music Under the Oaks. The Loyola University School of Music and the New Orleans Concert Band will also participate this year. The Louisiana Philharmonic has performed in past years.

“We’ve tried in recent years to do additional performances off campus,” Spanier said. “Performing outdoors is a very different experience and it’s a great chance to perform the music before the spring concert. There will be people there who usually don’t come to our concerts so we’re excited to reach a broader audience.”

Tickets to the Friends of the Band dinner on April 25 are available for purchase here.