Builders, heroes and a voice for girls 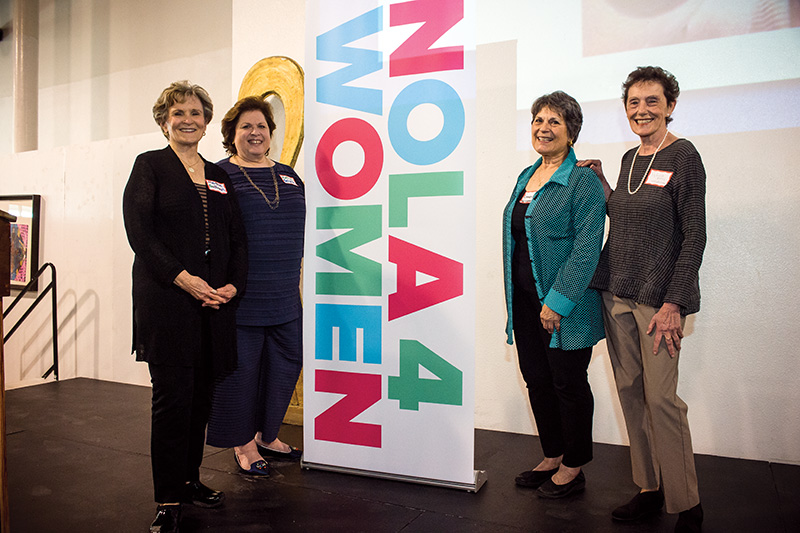 Nola4Women shines a light on women’s contributions to the history of New Orleans while advocating for a better status in the future. From left: Founders Martha Sullivan, Kathy Seligman, Florence André and Sylvia Frey. (Photo by Ryan Rivet)

The women—emerita professor of history Sylvia Frey and former university administrators and alumni Florence Defroscia André, Kathy Epstein Seligman and Martha Hatten Sullivan—have the goal of educating people about the important role that women have played in the city from its beginnings. They also want action taken to ensure that women and girls have the opportunity to reach their full potential.

They hope that Nola4Women will serve as a model that can be replicated in communities around the world.

Sullivan, former associate dean for academic affairs at Newcomb College and later vice president for student affairs and dean of students at Tulane, said, “From every corner of the city, regardless of the age, race, education or socio-economic status of the participants, an air of excitement permeates any gathering where the project is described.”

She added, “Members of the Tulane community have encouraged us every step of the way, offering assistance on many levels. … At every turn, we were met with excitement and enthusiasm. That delight helped to assure the continuation of this project. …

To bring awareness of women’s contributions to the city, a major educational component of Nola4Women is Women of New Orleans: Builders and Rebuilders, a series of more than 45 exhibits and/or performances that began in September 2015 and will continue to pop up through December 2018.

“Women’s history, in general, is on a parallel path with mainstream history, but it’s not been fully integrated into it,” said Frey. “It’s one reason you don’t see the accomplishments of women in medicine, music, politics and so many other genres in today’s school textbooks.”