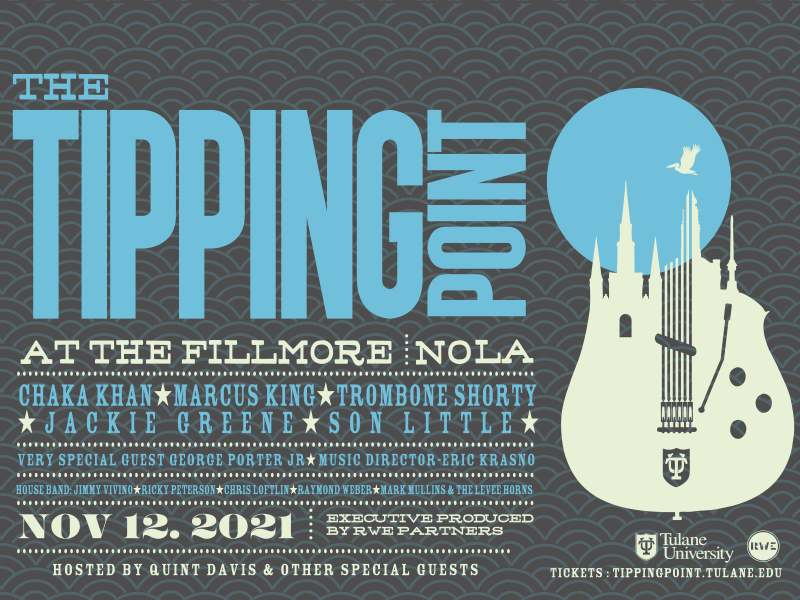 Tulane's fifth annual Tipping Point benefit concert will be held on Nov. 12 at The Fillmore New Orleans. Legendary eight-time Grammy winning singer, songwriter and community advocate Chaka Khan will headline the event. Proceeds from the concert will fund scholarships that will enable qualified students to attend Tulane regardless of their economic background. (Graphic provided by the Office of Advancement)

The concert will be hosted by Quint Davis, producer of the New Orleans Jazz & Heritage Festival, and special guests. Davis, who attended Tulane before embarking on his career in the music industry, has been involved in the production of the Jazz Fest from its start and is the CEO of Festival Productions, Inc. Two-time Grammy winner Eric Krasno will serve as the evening’s music director and bandleader. The all-star New Orleans house band will feature Jimmy Vivino, who was a member of the “Tonight Show” band; former Prince and current Stevie Nicks keyboardist Ricky Peterson; Berklee College of Music instructor and acclaimed bassist Chris Loftlin; former Dumpstaphunk drummer Raymond Weber; and Mark Mullins & The Levee Horns, who have backed Bruce Springsteen, Keith Richards, Sheryl Crow, Gregg Allman, Peter Frampton and numerous other major artists.

Proceeds from the concert will fund scholarships that will enable qualified students to attend Tulane University regardless of their economic background. In addition to raising money for deserving students, the concert will energize and engage the Tulane family and the New Orleans community.

“This is a chance to enjoy some of the country’s top musicians while helping deserving students throughout the city and nation attend Tulane,” said Luann Dozier, vice president of advancement at Tulane. “As the Tipping Point continues to get bigger and better every year, its positive impact on the lives of young people also continues to grow.”

The Tipping Point, which anchors WAVE21, Tulane’s homecoming, reunion and family weekend, is the latest endeavor by RWE Partners. Co-founders Greg Williamson and Nicole Rechter are leaders in the world of benefit concerts, co-producing along with John Varvatos, the annual Love Rocks NYC benefit concert at New York’s famed Beacon Theatre for God’s Love We Deliver.

“Nicole and I are honored to produce this annual benefit concert on behalf of Tulane University, and to support the live music and the already vibrant cultural scene in New Orleans. There is no other university putting on an annual show of this caliber, and there is no better place for it to happen than New Orleans.”