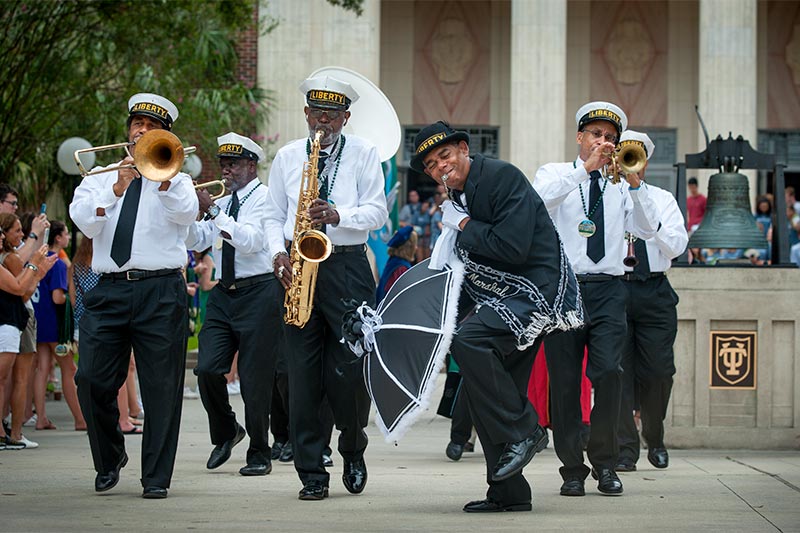 Dr. Michael White's Original Liberty Jazz Band gives students a taste of what the culture of New Orleans has to offer at the conclusion of the annual President's Convocation for New Students Saturday (Aug. 27). (Photo by Paula Burch-Celentano)

First-year students arrived at McAlister Auditorium on the uptown campus on Saturday (Aug. 27) expecting a typical welcome speech from Tulane University President Mike Fitts during the annual President’s Convocation for New Students. Instead, students received a New Orleans–style welcome that involved the marching band, a second-line and an experience much like that of a Mardi Gras parade.

Among those welcoming the Class of 2020 as part of the platform party alongside Fitts were university deans and leaders of admission, student affairs and student government.

The students, all in matching shirts presented to them upon their arrival, sat shoulder-to-shoulder listening intently to the three-pronged challenge issued by president Fitts.

“Step outside your comfort zone. Do something that scares you.”

“Step outside your comfort zone. Do something that scares you,” said Fitts, recommending that science majors also explore the liberal arts and vice versa.

Challenge two: “Get to know people very different from yourself.”

And lastly, students were challenged to preserve the university’s community, by engaging in “passionate debate while treating others with dignity and respect.”

Much was accomplished during the 45-minute presentation, which included several increasingly resounding calls of “Roll Wave,” and a music lesson on the alma mater led by the Tulane acapella group, Green Envy.

After singing the alma mater three times, students will likely be humming the sacred tune for weeks to come — mission accomplished.

Lauren Jennings of San Antonio, Texas, and Lily Seward of Philadelphia, Pennsylvania, exited the auditorium with wide eyes and smiles as the event concluded with a recessional into the Lavin-Bernick Center quad. There, hundreds of parents were lined parade-style to cheer on their college students as they embark upon this new phase of their lives.

A few parents were teary-eyed. Some students were, too.

“This is such an amazing experience,” said Jennings, as she swayed to the sound of Dr. Michael White’s Original Liberty Jazz Band.  “Tulane continues to surprise me.”

“If the goal here was to make me feel welcome on campus, that’s exactly how I feel.”