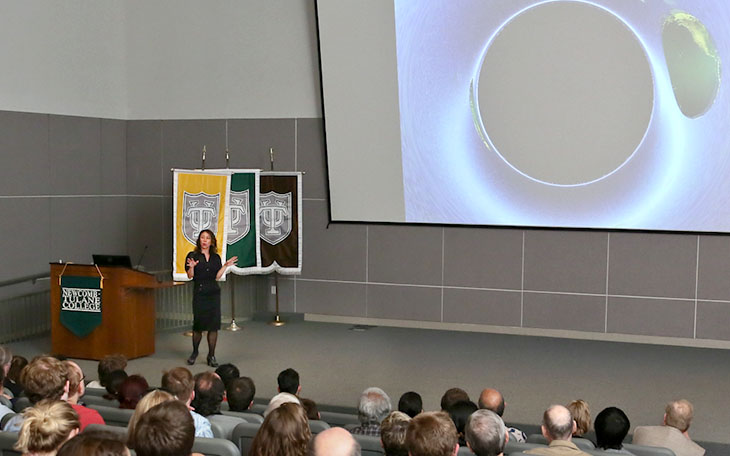 A recent revolution in physics adds a soundtrack to the “silent movie” of the cosmos, said cosmologist Janna Levin at the Crossroads Colloquium on Tuesday (April 5).

Levin is a professor at Barnard College of Columbia University, where she studies the early universe, chaos and black holes. She spoke about the past, present and future of science and her most recent book, Black Hole Blues and Other Songs from Outer Space.

The colloquium is a forum for conversation on issues of relevance to both humanities and sciences, sponsored by the Newcomb-Tulane College Office of Cocurricular Programs.

“Everything we know about the universe comes from light.”

“Everything we know about the universe comes from light,” Levin said. She explained that the speed at which light travels from distant galaxies to Earth allows researchers to look back in time.

LIGO, a project that created gravitational wave observatories in Louisiana and Washington, was established to measure these vibrations in the form of sound. The lab succeeded six months ago when it recorded the collision of two black holes, both more than 30 times the mass of the sun, from 1.3 billion years in the past.

The collision might sound like the beat of an old drum, but it represents a revolution, said Levin. This experiment could allow researchers to uncover the nature of dark matter, a substance that comprises much of the universe yet has never been seen.

The experiment began with the work of Einstein, who proposed that gravity was not caused by the earth pulling an object. Instead, he believed that the object itself created curves in space-time.

Einstein’s theory suggests that gravitational waves are changes in the space-time curves around the sun, the Earth or a similar object due to movement. “You can’t see them, but you can record their vibrations,” Levin explained.

Jamie Logan is a junior majoring in English and classical studies with a minor in psychology at Tulane University.