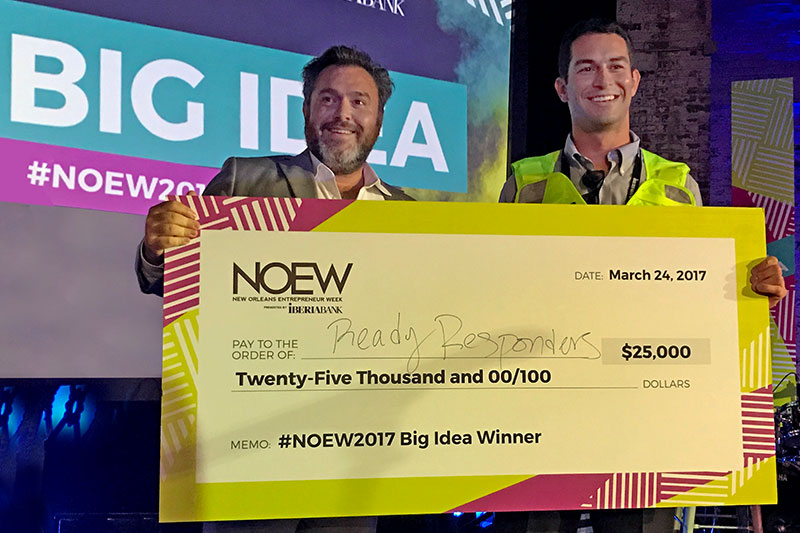 It takes approximately nine minutes for an ambulance to reach the scene of a medical emergency. But Tulane University alumnus Benjamin Swig has an idea that will cut that time to just five minutes. For that idea, Swig took home the grand prize Friday (March 24) during The Big Idea competition at New Orleans Entrepreneur Week.

Swig, a 2009 graduate of the Tulane School of Public Health and Tropical Medicine and a 2016 graduate of the Executive MBA program at the A.B. Freeman School of Business, is co-founder of the award-winning startup Ready Responders, which took home two including $25,000 in cash and a $30,000 advertising package from local firm Peter Mayer.

The idea developed from a conversation between Swig and his co-founder Justin Dangel, who had recently returned from a trip to Israel.

“We saw this as a good opportunity to mobilize and empower community members who are trained and who want to help others.”

In Israel, Dangel witnessed a similar system in play that allowed trained first responders who were in closer proximity than the ambulance to arrive on the scene first.

“He asked if I thought that model could work in America and for the last year we’ve been working to get this up and running,” said Swig. “We saw this as a good opportunity to mobilize and empower community members who are trained and who want to help others.”

A live version of the Ready Responders is planned for release in the next six to 12 months and will be completed in three phases. The first phase consist of having part-time emergency medical professionals receive notifications through an app when someone nearby needs medical attention. That professional can go to the scene and provide assistance until the ambulance arrives.

Phase two integrates a nurse hotline that will help with medical triage and general health inquiries. Phase three includes the implementation of telehealth consultations in which the patient and responder would connect with a hospital-based physician and review the patient’s vitals signs and physical findings.

“Many people call 911 who don’t have a medical emergency,” said Swig. “This component will allow the physician to help a person determine whether they need urgent care, emergency care or if a visit to their primary care doctor will work.”