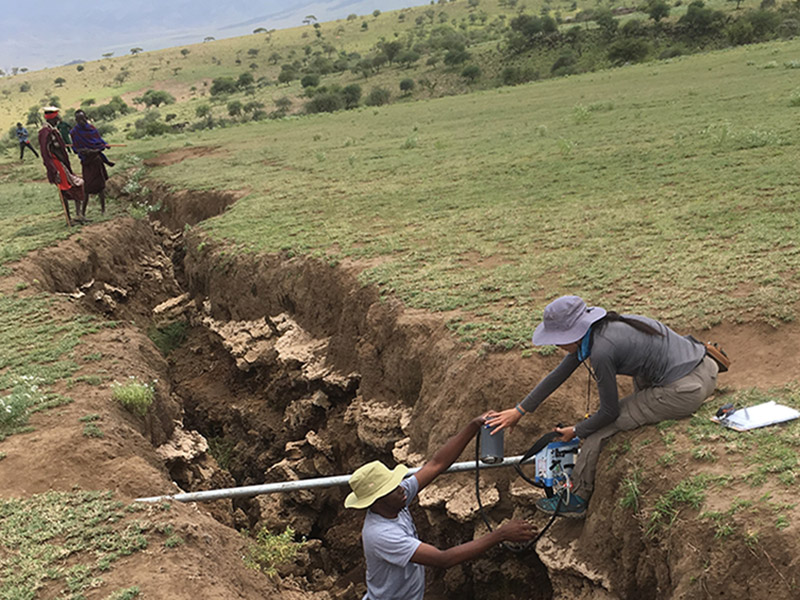 Sarah Jaye Oliva, right, a Tulane University PhD student, works with Amani Laizer, a University of Dar-es-Salaam student, to make soil gas measurements in Tanzania in 2018. CO2 gas is flowing from a fissure where molten rock moved up a crack in the Earth’s crust after a Magnitude 5.9 earthquake and the Oldoinyo Lengai volcano (background) erupted in 2007. Maasai pastoralists (middle ground) also observe. (Photo by James Muirhead)

Diamonds, those precious, sparkling jewels, are known as the hardest materials on Earth. They are a high-pressure form of carbon and found deep in the ground.

While diamonds are commonly thought of as hard and stable, carbon from about 100 miles beneath the African plate is being brought to shallower levels where diamond will become unstable. Molten rock (magma) brings the excess carbon towards the surface, and earthquakes open cracks that allow the carbon to be released into the air as carbon dioxide.

PhD student Sarah Jaye Oliva and Professor of Earth and Environmental Sciences and Marshall-Heape Chair in Geology Cynthia Ebinger are among a group of international researchers who co-authored a paper “Displaced cratonic mantle concentrates deep carbon during continental rifting,” which was published in the journal Nature on June 3.

The pair report on their findings about the African continent splitting in two and the massive amounts of CO2 (carbon dioxide) being released into the atmosphere.

Ebinger said of her student, “Sarah Jaye contributed to the gas measurements, and she analyzed the deep structure and state-of-stress data that enabled us to deduce the process leading to the excess CO2 in some rift zones.”

Oliva participated in a monthlong campaign in 2018 to sample gases released diffusely through the soil and at springs that dot the East African Rift System in Tanzania.

Through the sampling, Oliva and other researchers found that CO2 fluxes [flows] and the number of earthquakes are highest where the rift intersects the edge of the ancient, thick cratonic plate that is more than 60 km (about 37 miles) thicker than the adjoining area.

Oliva said this made sense because the steep edge of the bottom of the plate is “where we expect magmas (molten rock material within the Earth that will cool to form igneous rock) to form and where faulting and fracture networks should be most intense.”

“The resulting faults and fissures, we think, act as conduits through the crust that concentrate fluxes of CO2 sourced from beneath,” said Oliva.

Modeling by the researchers also suggests that the mantle underneath the study region may be enriched in carbon due to the local erosion of the cratonic lithosphere that may even contain diamonds. (A craton is an old and stable part of the continental lithosphere, which consists of the Earth’s two topmost layers, the crust and the uppermost mantle.)

“The eroded material could melt as it moves towards thinner lithosphere, and this would be another factor in increasing the CO2 flux through the rift valley margin,” said Oliva.

She added, “Participating in this project was extremely rewarding for me.  We, as seismologists, geodynamicists, structural geologists and geochemists all came together to understand how rifts help mobilize CO2 that is sequestered in the deep Earth. This newly liberated CO2 ultimately influences Earth’s climate over geologic time, temporarily contributing to global warming.” 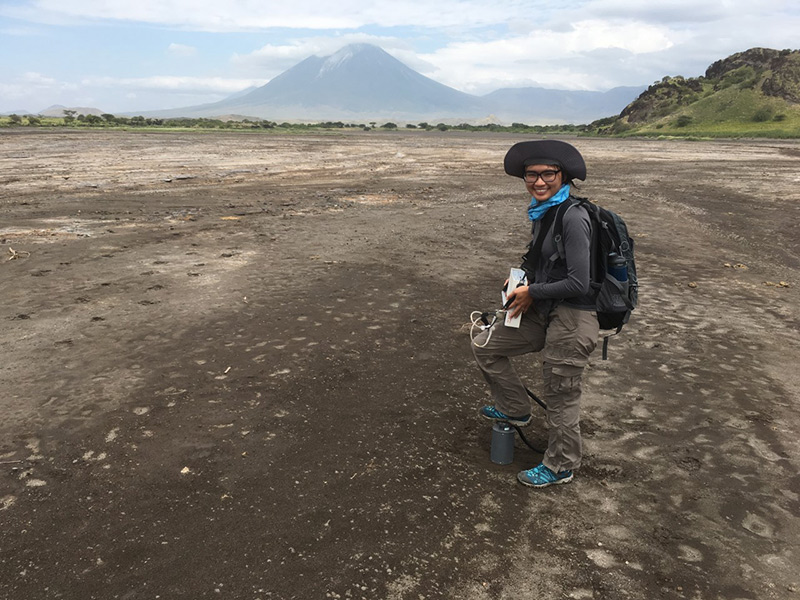