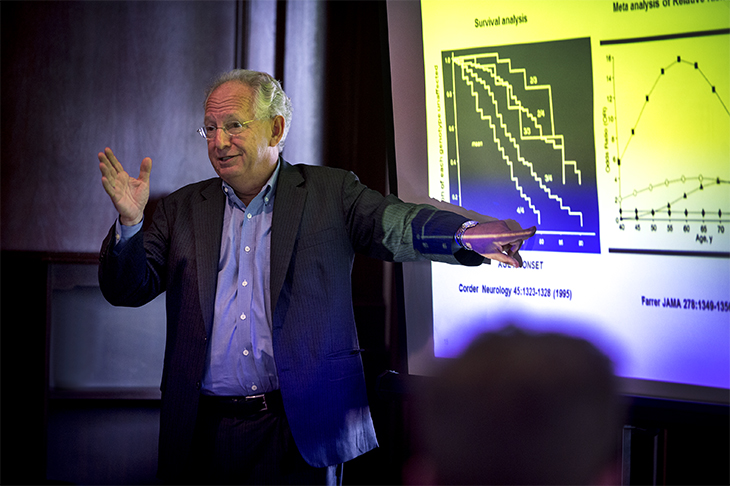 Giving the John J. Witmeyer III Dean’s Lecture on Alzheimer’s disease, alumnus Dr. Steven Paul discusses the genetic bases for the disease and how disease-modifying gene therapy treatments might delay the development of symptoms in patients who are at risk of developing the disorder that is “100 percent incurable and 100 percent fatal.” (Photo by Paula Burch-Celentano) 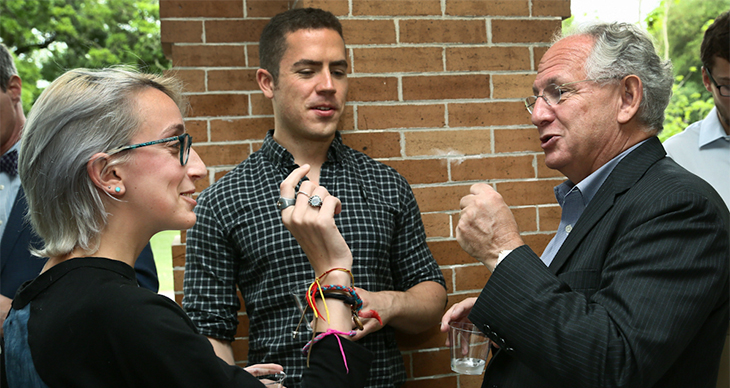 Dr. Steven Paul, right, who received three degrees from Tulane University, chats with seniors Leat Halpert, left, a psychology major, and Mike Klug, a neuroscience major, on the porch of Cudd Hall after his lecture on potential gene therapy treatments for Alzheimer’s disease. He is pioneering research into gene therapy treatments for central nervous systems diseases at his company, Voyager Therapeutics. (Photo by Guillermo Cabrera-Rojo)

Dr. Steven Paul got his start in medical research in Dinwiddie Hall on the Tulane University uptown campus. In the laboratory of professor Merle Mizell, Paul was an undergraduate student worker feeding frogs for developmental biology and cancer research.

Paul, who is an expert in neuroscience with an extensive record in central nervous system (CNS) drug discovery and development, was back on campus on Thursday (April 15) at the invitation of Newcomb-Tulane College for the John J. Witmeyer III Dean’s Colloquium Series to discuss his career with students.

“I think we’re going to start seeing encouraging clinical data [in Alzheimer’s disease research] in the next three to four years.”

It was mentors like Mizell, Paul said, that sparked his interest in the biological bases for CNS and psychiatric illnesses. Paul, who came to Tulane from Chicago when he was 17 in 1968, holds a B.A. in biology and psychology from Tulane and an M.S. and M.D. from the Tulane University School of Medicine. His first scientific paper, co-authored with Mizell, was published in 1972.

Before founding Voyager Therapeutics, Paul spent 17 years at Eli Lilly Research Laboratories, where he was director of research and development. A psychiatrist, Paul also was scientific director of the National Institute of Mental Health and a professor of neuroscience, psychiatry and pharmacology at Weill Cornell Medical College.

At the lecture, Paul discussed Alzheimer’s disease, which he told the students will account for $1 trillion in healthcare costs in the United States by 2050 “when most of you are my age.”

By understanding why some individuals have a “predilection for or susceptibility for developing Alzheimer’s disease because they have a certain gene, we can understand what the disease is doing [in the brain] and treat the disease.”

Paul has pioneered the research and development of disease-modifying drugs such as solanezumab, a neuro-protective drug that may slow the progression of Alzheimer’s disease, which is in Stage III clinical trials with people now.

“I think we’re going to start seeing encouraging clinical data in the next three to four years,” Paul said.