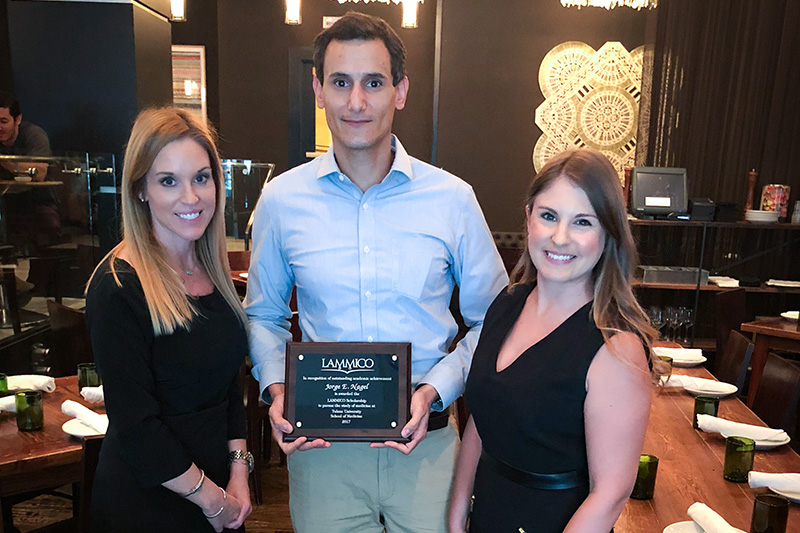 Tulane-trained engineer Jorge E. Nagel once helped doctor a robotic car to a historic finish in a U.S. Defense Department–sponsored race. Now he’s engineering a new career for himself as a first-year student at Tulane School of Medicine.

Nagel is the recipient of a 2017 medical school scholarship presented by LAMMICO, a liability insurer for medical professionals that awards a scholarship to one incoming first-year student at each of Louisiana’s three medical schools.

His expertise in robotics and control systems led to his work on the Kat-5, an autonomous car that finished fourth in the 2005 Defense Advanced Research Projects Agency’s Grand Challenge race, one of just five entrants to complete the course, out of a field of 195.

For their Kat-5 triumph, Nagel and his four “Team Gray” colleagues were named to Gambit newspaper’s 2008 “40 Under 40” honor roll, which recognizes the accomplishments of individuals who are 39 years old and younger in New Orleans.

And his inventions aren’t limited to machines. As founder of Rehydration Solutions LLC, Nagel developed Lyte Stix, an all-natural electrolyte freezer bar for athletes — likely inspired by his own experience as a top-500 finisher in the Crescent City Classic 10K.

Among his activities at the School of Medicine, Nagel is serving as the 2018 president of the Medical Entrepreneurship Interest Group at the medical school.

Nagel says he is honored by the LAMMICO award and is happy to be at the Tulane School of Medicine.

“It was my first choice.”