Exploring religion as a source of resistance and creation 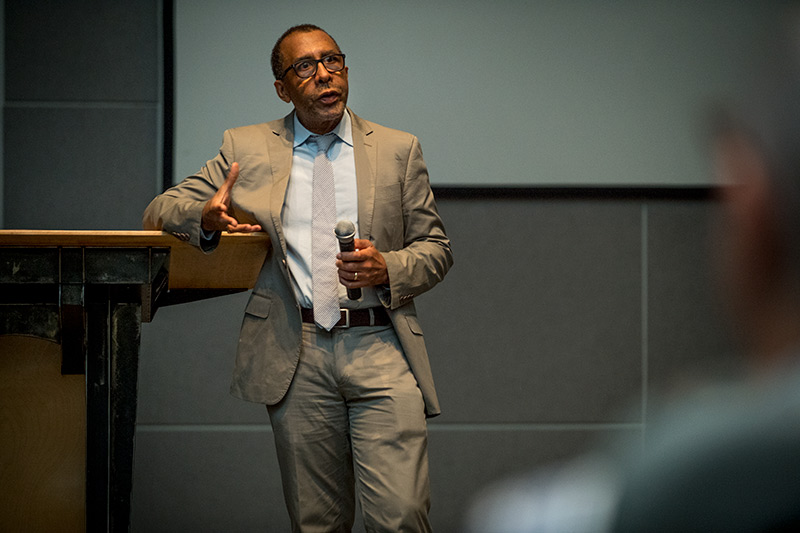 Richard Brent Turner, who served as lecturer during the sixth annual Sylvia R. Frey Lecture series Monday, described a desperate melodic prayer that laid roots for the foundations of the blues and a slave who translated the Lord’s Prayer into Arabic to achieve his freedom. His compelling stories highlighted the influence of West African Muslim slaves in New Orleans.

“Islam is an important conduit through which to understand the dynamic interactions between empires, cultures and racial identities in the Gulf South in the 18th and 19th centuries,” said Turner, a professor at the University of Iowa whose research centers around African-American religious history, music and identity.

Muslim slaves could typically be identified according to their names — names with Arabic origins such as Fatima, Bilaal or Rahman — which served to anchor slaves in their native identities. Turner described slaves’ retention and continuation of these traditional Islamic names as a form of linguistic resistance against typically Christian slave owners.

“Some enslaved Muslims mention the superiority of their religion to Christianity and demonstrate their literacy in Arabic as a form of intellectual resistance to enslavement,” said Turner.

This legacy of naming can be traced forward to today, as Turner pointed out the possibility that African-Americans with the last name Bailey may have ancestors whose original name was Bilaal.

The musical connection between West African traditions of Islamic prayer and the later emergence of the blues style in New Orleans was also discussed.

“Muslims enslaved in coastal West Africa began the custom of singing and praying in Arabic for their freedom,” said Turner. “The spiritual aspects of the religion influenced African-American arts and performance, especially by West Africans in Congo Square.”

Turner described the wistful, melodic sound of the slaves’ Arabic prayers as a herald of the later blues music to come.

He reminded his audience that this often forgotten group of individuals, enslaved men and women from West Africa, influenced the landscape of the American South just as much as any other race, and that they possessed a fierce spirit of resistance that manifested through their Islamic faith.

The presentation was sponsored by the New Orleans Center for the Gulf South.