Father and son earn degrees at the same time 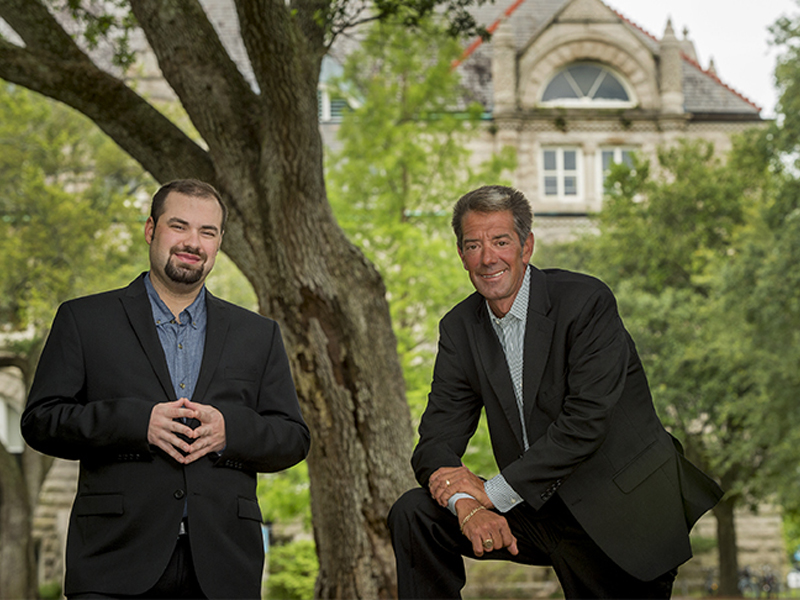 John Pounders IV, left, and his father, John Pounders III, both enrolled in the School of Continuing Studies and earned degrees in the Class of 2016. (Photo by Paula Burch-Celentano)

John J. Pounders III and John J. Pounders IV enrolled in the School of Continuing Studies years apart, but both officially graduated this May. The father-and-son duo, who hail from Gretna, Louisiana, majored in media arts and public relations, respectively, while both working full-time. John Pounders III runs a fishing charter service called Eccentric Charters, and his son works in the restaurant industry. The two rarely saw each other in classes. Still, they helped each other out by proofreading papers and discussing ideas. Pounders III says his son helped him learn a lot of technology, too. But working while pursuing a degree was often difficult. Because the fishing charter depends on clients’ schedules and often involves overnight work, Pounders III sometimes missed multiple classes. “A nightmare” is how Pounders III describes the balancing act. “I missed class a good bit, and it showed in my grades.” But the faculty were always very supportive and helpful, he adds. Pounders III says he considered quitting altogether several times but somehow kept going. He says he thought, “ ‘We’ve come too far to give up now. We don’t quit. We finish.’ ” Both men credit their Tulane education to the encouragement and support of their family. Pounders IV says his father helped him decide to attend Tulane. “I’m glad I made the decision,” he says. “He was instrumental in me going there; for sure he led me in the right direction.” Pounders III, on the other hand, says his own father provided invaluable support. “He tried to help me all he could with my business; he’d stay and work for me,” Pounders III says. Pounders III opted out of the commencement ceremony; he wanted his son to have the attention. “That’s his day,” the proud papa said. “You know how parents are, they’d rather see their son walk than them.”