Give Green event raises more than $1 million in 24 hours 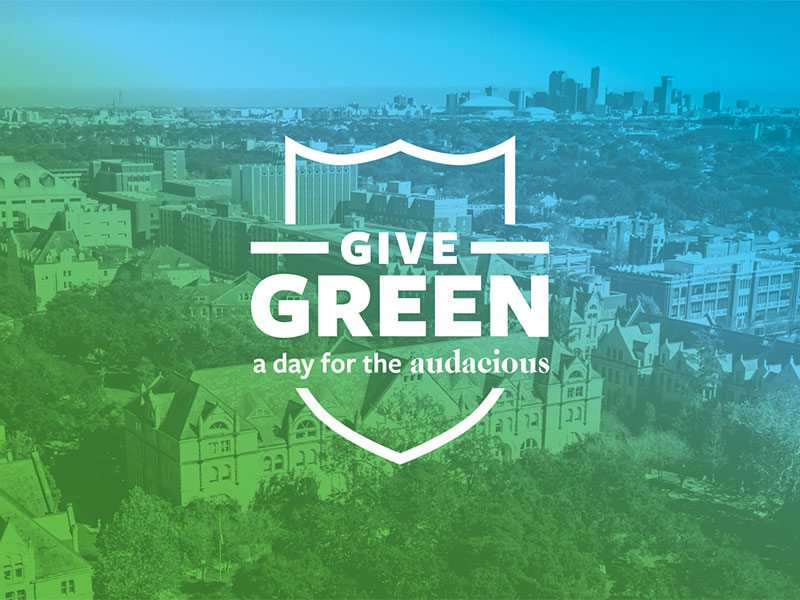 During the 24-hour “Give Green: A Day for the Audacious” event held on June 25, Tulane University raised over $1.1 million from more than 2,700 gifts.

Tulane University’s third annual giving day was one for the record books, breaking previous giving day fundraising records by nearly 45% as thousands of donors came together to celebrate what they love so much about the university.

During the 24-hour “Give Green: A Day for the Audacious” event held on June 25, over $1.1 million was raised from more than 2,700 gifts, according to preliminary numbers. The successful event stands as a giving day watermark for the university. Coming in a challenging year for many, the achievement stands as a powerful vote of confidence in Tulane.

Usually held in March, this year’s Give Green had been postponed twice by the university out of respect for the challenges faced by members of its community.

“Given the uncertainty of the past few months and the multiple postponements of Give Green, I was absolutely overwhelmed by the astounding generosity of our Tulane community. I know that Tulanians everywhere have dealt with extraordinary challenges this year — so to see them come together in support of the university was even more powerful than in the past,” said Jenny Nathan Simoneaux, executive director of Annual and Leadership Giving at Tulane.

The donors who contributed to Give Green were as far-flung as they were devoted to the university. Contributions came from all 50 states and from 12 countries during the remarkable 24-hour event.

During the event more than two dozen challenges and matching gifts helped spur donor momentum — and further boosted the impact of generosity to schools, units and initiatives across the university.

The Carol Lavin Bernick Big Green Grand Prize took advantage of the “winning nature” of Tulanians near and far, fostering friendly rivalries between schools and units by offering bonus funds for the highest number of gifts on Give Green Day. Tulane Athletics, Newcomb Institute and the School of Professional Advancement each won an extra $5,000 because they received the highest number of gifts in their respective categories. Tulane Law School, the School of Liberal Arts and the Center for Public Service won $2,000 each. The A. B. Freeman School of Business, the School of Science and Engineering, and the Tulane University Marching Band also received a bonus $1,000.

Jackie and Kevin Hunt, who last year successfully encouraged current students to support Tulane by making a gift to Give Green, turned their sights on fellow parents this year. The couple, who are parents of Madison Hunt (SSE ’21) and Kerrigan Hunt (B ’21), awarded a $10,000 match gift in support of student scholarships.

Fellow parents Steve and Bea Glover, who are parents to Sophie Glover (B ’19) and Jacob Glover (B ’20), challenged Tulane students to make a gift. When 50 students made a gift, it unlocked $2,500 from the Glovers. When 100 gave, it unlocked another $2,500. In total, nearly 200 students took up the challenge this year.

Alumni with reunions in 2020 (those whose graduation years end in 0 or 5) were also offered a special challenge — the largest one this year — with an anonymous reunion celebrant matching up to $50,000. Overall, those classes more than tripled that challenge — bringing in $234,317 toward their class totals. The Class of 1985 came out ahead, raising more than $75,000. The Class of 1990 was fast on their heels, garnering over $73,000.

The event was a resounding success across various social media platforms throughout the day as Tulanians shared their excitement about the university with friends, family and colleagues. Facebook, Twitter and Instagram each played a part in broadcasting the many triumphs of the day to alumni, students, parents, faculty, staff and friends.