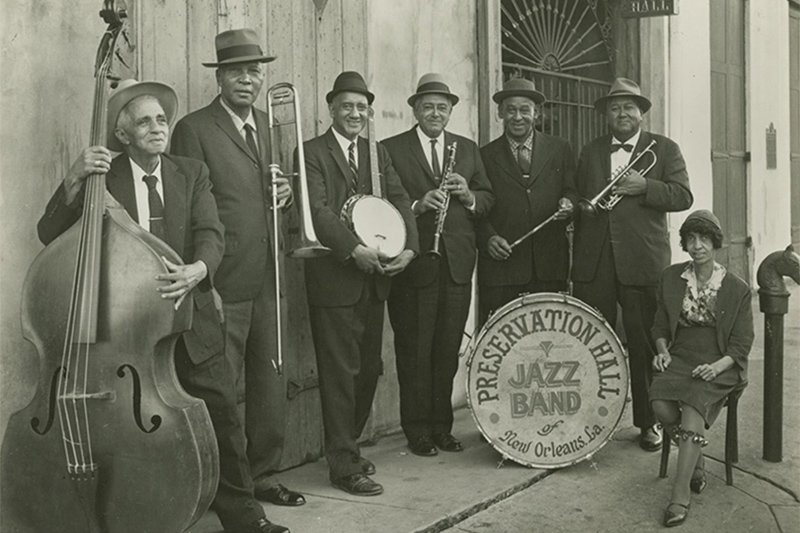 Images like this one of the Preservation Hall Jazz Band are discussed during the “New Orleans: Music, Culture, and Civil Rights" workshops. Educators from around the country also visit sites such as Preservation Hall to learn about the city's history. (Photo from the Hogan Jazz Archive Photography Collection)

The National Endowment for the Humanities (NEH) has awarded grants for collaborative programs to the School of Liberal Arts’ New Orleans Center for the Gulf South  and to Michael R. Cohen of the Department of Jewish Studies in the amounts of $160,371 and $143,700, respectively.

Continued support from NEH will allow the New Orleans Center for the Gulf South to present the second iteration of the workshop “New Orleans: Music, Culture, and Civil Rights” next summer. The workshop is a program of the NEH’s Landmarks of American History and Culture Workshops for School Teachers.

Last year, NOCGS was selected as one of only 15 Landmark grant recipients across the country. These NEH programs are aimed at enhancing humanities education in kindergarten through 12th-grade classrooms.

“Many people want to learn about civil rights and to learn from the city of New Orleans, and we expect our application numbers to continue to grow.”

“Many people want to learn about civil rights and to learn from the city of New Orleans, and we expect our application numbers to continue to grow,” said Rebecca Snedeker, Clark Executive Director of the New Orleans Center for the Gulf South.

Music Rising at Tulane, also offered through the New Orleans Center for the Gulf South, will welcome 72 educators next summer for lectures, site visits to important cultural institutions such as Preservation Hall and St. Augustine Catholic Church, and inquiry-based learning, all designed to complement each other.

For the workshop’s culminating session, participants will visit the New Orleans Jazz Museum for a final panel composed of contemporary New Orleans musicians and scholars addressing the question, “How does New Orleans support its musical traditions and foster new development today?”

The collaborative seminar “Privilege and Prejudice: Jewish History in the American South” grant was awarded through the NEH Summer Seminars and Institutes for College and University Teachers program. Cohen, Sizeler Professor and Chair of the Department of Jewish Studies, along with colleagues Shari Rabin and Dale Rosengarten of the College of Charleston, will co-direct the two-week seminar for college and university faculty members in Charleston, South Carolina, next year. Read more about the award and seminar here.