With help from Tulane, Panama aims to become a completely bilingual country 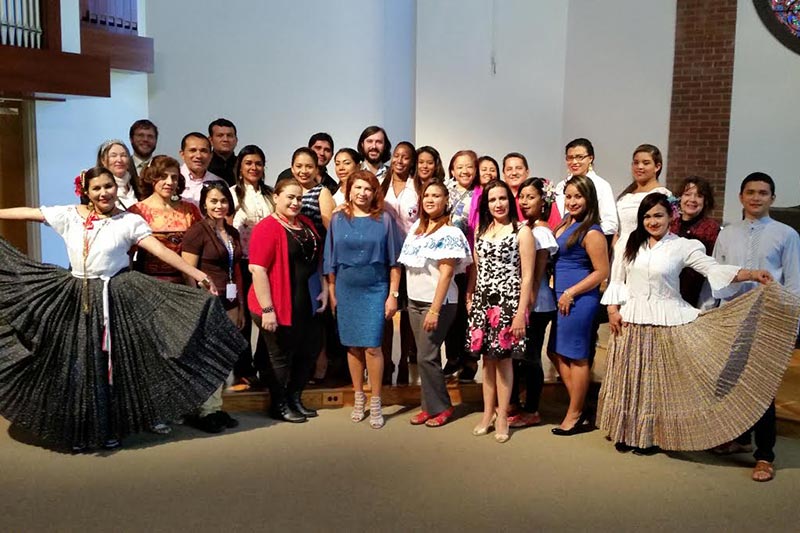 The fourth cohort of Panamanian educators celebrate completion of the program during a ceremony in Rogers Memorial Chapel on the uptown campus earlier this month. (Photo provided)

Tulane University and the Panamanian Ministry of Education have collaborated to form one of the largest language policy initiatives ever attempted. The Panama Bilingüe program, a creation of the government of Panama, is designed with a goal of making the entire country bilingual in Spanish and English within a single generation.

“They are sending all Panamanian English teachers to the United States, Canada or Great Britain for eight weeks,” said Robert Connor, Director of ESL at the Center for Global Education. “Our role is to let them experience American culture, to work on their English language and to teach pedagogy.”

The fourth cohort of Panamanian educators recently celebrated completion of the program with a ceremony in Rogers Memorial Chapel on the uptown campus. Tulane is one of 20 universities to participate in the program.

"They are not only trying to improve their language ability, but they are also trying to benefit from Tulane’s scholarly environment.”

“Many participants are from Panama City, but many are from rural areas with open one-room school houses,” said staff instructor John DePriest. “Each group has about 25 contact hours per week. They are not only trying to improve their language ability, but they are also trying to benefit from Tulane’s scholarly environment.”

As part of the exchange program, DePriest and his colleagues will travel to Panama City in May where they will meet to discuss a new layer to the program in which American graduates are invited to become assistant teachers in Panama.

“This experience helped me grow tremendously as an educator,” said staff instructor Elizabeth Rafferty. “It was a reminder of the layers that have to be peeled back until you get to the true learner so that authentic student-teacher interaction can happen and true learning can move forward. For the first time in 30 years, they made me forget that English isn’t their first language. It really was a stunning experience.”