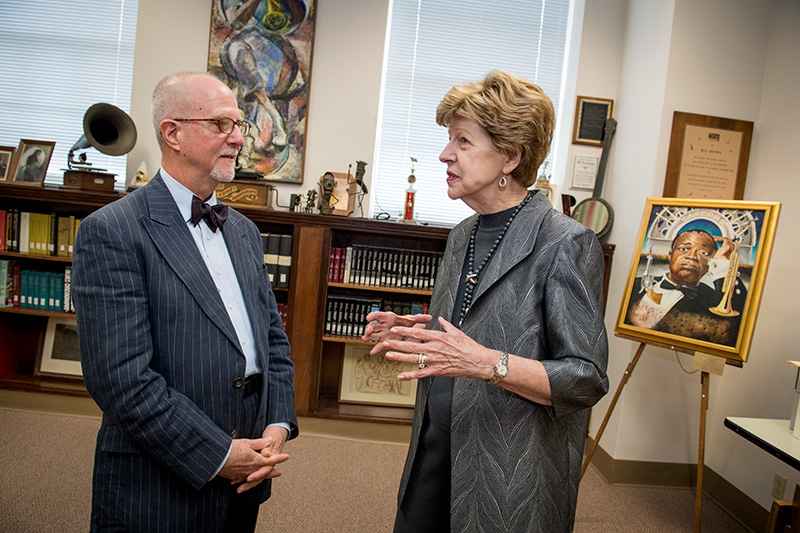 When they received news of his impending retirement from Tulane University, Carolyn Vance Smith and Marion Smith decided to help their family friend, Bruce Raeburn, director of special collections at Howard-Tilton Memorial Library and curator of the Hogan Jazz Archive, leave on a high note. The Smiths decided to commemorate Raeburn’s time at Tulane by donating a painting of Louis Armstrong composed by their son, local artist William M. Smith Jr., to the university.

The painting of the musical legend will be permanently displayed in the Hogan Jazz Archive to honor Raeburn’s academic legacy.

In a small ceremony to dedicate the portrait, the Smiths gathered with Raeburn, David Banush, dean of libraries and academic information resources, and friends and family members inside the Louis Prima Room in Jones Hall.

“Armstrong was so deep and mysterious, and this work captures that.”

— Bruce Raeburn, director of special collections and curator of the Hogan Jazz Archive

“Bruce has been our jazz archivist for decades. This place without him is difficult to imagine, as his many ties to the community made the archive possible,” said Banush.

Before becoming a faculty member, Raeburn received his PhD from the Tulane in 1991.

The work features vibrant imagery, including Armstrong Park’s overarching gates, sheet music displaying the chord progression to “What A Wonderful World” and a smoking gun.

Orphaned at age 11, Armstrong shot a pistol on New Year’s Eve and was consequently arrested and sent to a reformatory. The institution’s director gave him his first cornet.

“Going to the reformatory was the best thing to ever happen to him, because he came into a stable environment and was given an opportunity to play music,” said Raeburn.

However, the portrait’s most striking element is Armstrong’s worn-out expression, as Smith sought to portray a different side of Satchmo.

“I couldn’t just paint the same tired image of Louis blowing on the horn,” said Smith. “As he achieved fame, stardom and success, his managers worked him to death — literally until his lips bled.”

“Armstrong was so deep and mysterious, and this work captures that,” said Raeburn.