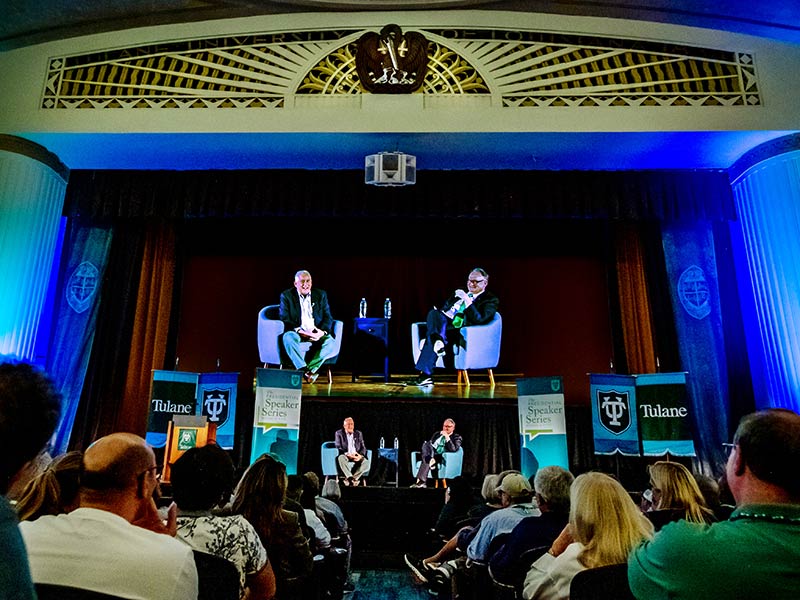 Best-selling biographer Walter Isaacson (left), the Leonard Lauder Professor of American History and Values at Tulane and co-chair of the New Orleans Book Festival, and Tulane President Michael A. Fitts (right), engaged in conversation as a special installment of the Presidential Speaker Series. The talk was part of Tulane Homecoming, Reunion and Family Weekend. (Photo by Paula Burch-Celentano)

As part of Tulane Homecoming, Reunion and Family Weekend, Tulane President Michael A. Fitts led a lively conversation with best-selling biographer Walter Isaacson, the Leonard Lauder Professor of American History and Values at Tulane and co-chair of the New Orleans Book Festival.

The event, held in McAlister Auditorium on Friday, attracted more than a thousand alumni, students and parents. Isaacson, prompted by questions from Fitts, related fascinating, little-known anecdotes from the lives he has chronicled through his books.

Fitts asked Isaacson to expand on the personal qualities of the innovators who fill the pages of his popular biographies, including Benjamin Franklin, Leonardo da Vinci, Albert Einstein, Steve Jobs and Jennifer Doudna, who helped cracked the genetic code, leading the world in a life sciences revolution.

These people “in a sense break out of the box and make a difference in the world,” said Fitts. “You describe them as connecting beauty with science, that they cross boundaries, but is there anything about their psychology and character that you found that is a common theme in all these people?’

“Unbounded curiosity” is a quality that stands out in his subjects, according to Isaacson and inspires groundbreaking individuals to think more, question more and ponder the world around them more deeply.

“Every century, you can find a place that becomes a cradle of creativity like Florence in the 1570s was for da Vinci, Philadelphia for Ben Franklin in the 1770s, and the Silicon Valley for Steve Jobs in the 1970s,” Isaacson noted, drawing a parallel between that city and the Crescent City as a birthplace of new ideas, creativity and innovation.

“New Orleans has a diversity that would have almost put Florence to shame,” he added.

“There’s no question. It’s what draws our students. It’s this creativity, this energy that emanates in New Orleans,” Fitts said, adding that the city consistently ranks as one of the top college towns in the nation.

“It’s about connecting your passion to something larger than yourself,” Isaacson observed, a trait he’s witnessed in Tulane students.

What is special about a woodpecker’s tongue and why be curious about it, Isaacson wondered?

“I think it is essential to push ourselves to be more curious,” said Isaacson. “It also means being open minded. The tongue of the woodpecker is three times as long as the woodpecker’s beak. I learned this because after reading it four times in Leonardo’s notebook, I said, ‘I got to figure it out. Maybe I have to understand that.’ I was able to look it up.”

It turns out that the tongue of one of the most famous members of the Picidae family, is elongated to protect its bird brain.

“When the beak of the woodpecker hits the wood, the tongue wraps around the brain, goes all the way through to cushion it. So that the woodpecker doesn’t get a concussion.

“There’s no reason you need to know that,” added Isaacson. The only reason to know it is out of curiosity, pure curiosity.”

Fitts encouraged all Tulanians to nurture their curiosity, pointing to Isaacson as a prime example of “one of America’s great public intellectuals.”

“He’s been driven by his own curiosity about other people’s curiosity and what is innovation. This has caused him to write some of the most important books about changes in society and the individuals who brought them about.”

The conversation was a special installment of the Presidential Speaker Series, which was established in 2019 to provide an opportunity for the Tulane community to learn from distinguished professionals with unique perspectives, talents and stories. 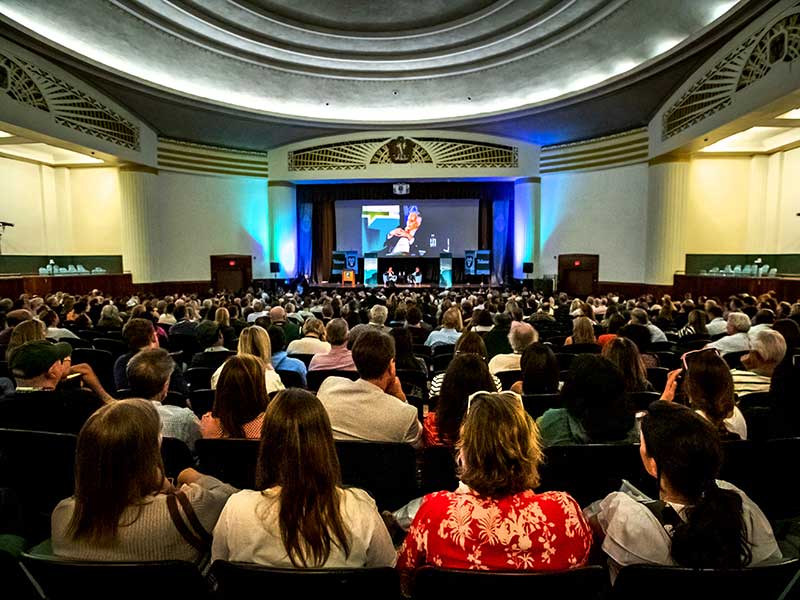 The event was held in McAlister Auditorium and was attended by more than a thousand alumni, students and parents. (Photo by Paula Burch-Celentano)