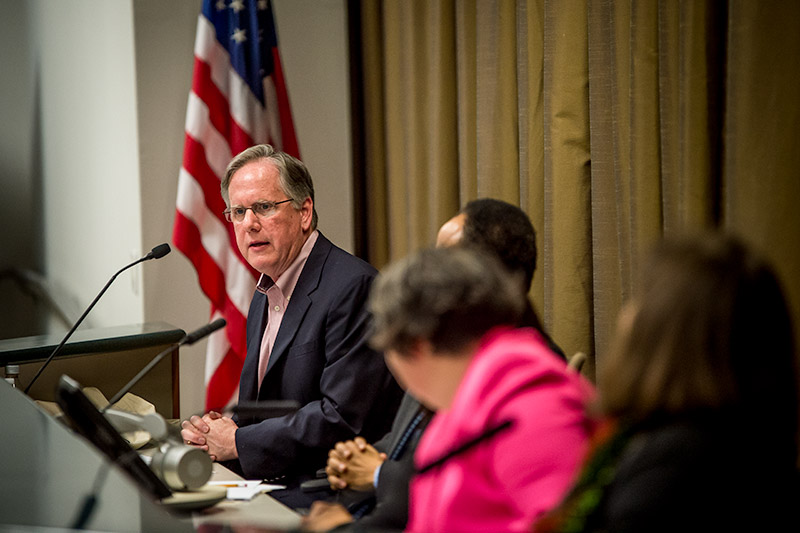 The Trump administration’s hasty immigration crackdown has panicked families, sent dangerous signals to the rest of the world and burdened lawyers trying to defend the executive actions, lawyers and scholars said at a Tulane University Law School discussion Feb. 8.

“How do you create the most chaos and fear? You implement it this way,” said attorney Kathleen Gasparian, who teaches immigration law at Tulane Law.

She referred to a Jan. 27 executive order barring Syrian refugees and temporarily blocking the entry of citizens from seven majority-Muslim countries.

“President Trump needs the courts, whether he knows it or not.”

Gasparian said that the order raises numerous questions about how the Constitution applies to it, partly because of the order's broad wording and because many actions it impacts, such as decisions on visa applications, occur outside U.S. borders.

“What that has meant in my world is a lot of terrified phone calls,” she said before a full-house audience of students, faculty and staff. “It’s an unfightable fight at the moment because you’re not sure what your fight is.”

Hlass noted that the administration has initiated other immigration policy changes with executive orders focusing on areas including a border wall, immigrant detention, the role of local law enforcement and so-called sanctuary cities. But the Jan. 27 order that primarily affected air travel has generated the most public attention because it is the only one the administration has attempted to immediately implement.

It also has spawned lawsuits across the country, including one blocking implementation that already has reached the 9th U.S. Circuit Court of Appeals, which heard arguments Feb. 7.

“Threats to our national security from terrorist groups are real, and we should respond to that threat. But it seems to me that this order doesn’t give us security,” said Professor Adeno Addis, whose work focuses on constitutional law and international human rights.

He said the executive order “draws the lines exactly the way the terrorists want them to be drawn,” increases the odds of attacks on American troops and undermines the credibility of U.S. supporters abroad.

Professor Stephen M. Griffin, an authority on presidential power, said the courts, in deciding whether to continue blocking the order, can’t ignore the intent behind it. He said unjustified discrimination doesn’t have to be a primary motive, just one motive, to invalidate a government action.

“President Trump needs the courts, whether he knows it or not,” Griffin said.

But, he said, Trump “has put his lawyers in a terrible situation” with the way in which the executive order was developed and implemented.

“The attorneys cannot justify in any normal sense what happened here because there was no administrative process backing it up,” he said.