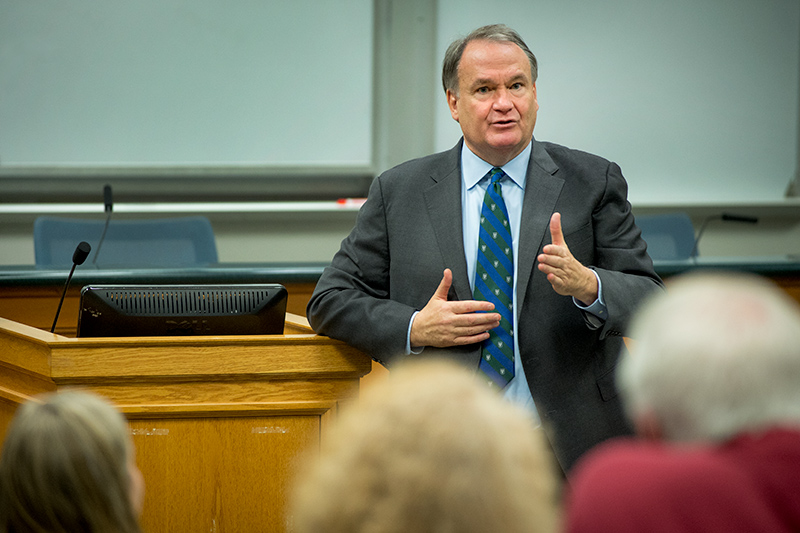 Tulane President Mike Fitts presents a talk on issues related to free speech on Monday (Nov. 13.) He spoke at the Phi Beta Kappa fall lecture on the Tulane uptown campus. Phi Beta Kappa is the oldest and most prestigious undergraduate honor society in the United States. The Phi Beta Kappa chapter at Tulane was founded in 1909. Fitts was selected for Phi Beta Kappa when he was a Harvard University student. (Photo by Paula Burch-Celentano)

Ever the law school professor, Fitts brought up for discussion problems and questions related to the exercise of free speech — or First Amendment rights.

Fitts presented three arguments for free speech from the quintessential jurist Oliver Wendell Holmes. Holmes served on the U.S. Supreme Court from 1902 to 1932 when much of the jurisprudence for First Amendment rights was established.

“Free speech is constitutive of other rights.”

“Free speech is constitutive of other rights,” said Fitts. He quoted Holmes, who wrote, “It is the indispensable condition of nearly every other type of freedom in our constitution.”

The second argument in favor of free speech, said Fitts, is that it is a mechanism for moving to truth.

The third argument is the “slippery slope argument,” said Fitts, “which is to say that if you start to get into the system of regulating speech you are going to end up fighting over things and regulating things that you don’t want to because everybody is going to be pushing to regulate certain types of speech.”

With the exercise of free speech, though, there must be respect for others’ views.

“We’re here to educate students,” Fitts said. “Students should be educated in not only questions of how to debate and how to structure discussions in a respectful way but they also should be taught to be respectful of people who are different than they are.

“We talk about the strength of a university that draws people from across the United States and from every racial and economic group, isn’t it our obligation to teach them to be respectful?”