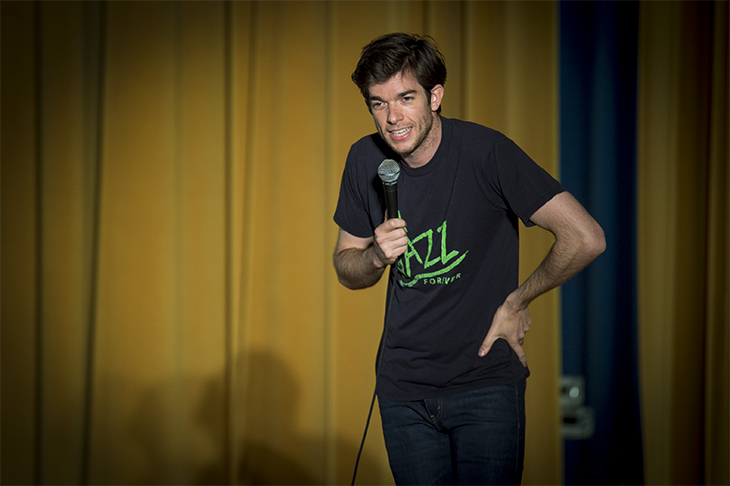 Comedian, actor, writer and producer John Mulaney provides a much needed study break for students on the uptown campus. (Photo by Paula Burch-Celentano)

“Once this guy told me he’d rather hear the sound of silence than my voice,” said John Mulaney, standup comedian, on his visit to Tulane University. While this man hadn’t enjoyed Mulaney’s performance, that certainly wasn’t the case for the comedian on Wednesday night (April 13) in McAlister Auditorium on the uptown campus.

Students packed into the auditorium to see the comedian, and laughter was a constant background noise throughout the show.

Mulaney has dabbled in many different forms of comedy from standup to writing to acting, and is best known for being a writer on NBC’s “Saturday Night Live,” creating lovable characters like Stefon.

“It’s great that students get comedy events like this close to finals to laugh at themselves and current events and relax just a little bit.”

Mulaney made sure to bring an original show to Tulane.

“He’s pretty self-deprecating and witty — his jokes are always new because he’s always making fun of the ridiculous things going on in society and in his life,” said Mulaney fan and sophomore Ryan Hodes.

Mulaney especially poked fun at Tulane. He came out wearing a shirt that said “jazz” in bold red letters, holding a packet from President Fitts’ inauguration that someone left backstage. He reminisced about his own college experiences, mentioning how his university reaches out to him all the time for donations.

“Didn’t I already pay the place to go there for four years?” he said, laughing along with the crowd.

Besides the jokes, the best part about Mulaney’s routine was how familiar and interactive he was with the audience. He asked one student what her major was. When she responded she was in chemical engineering and researching cancer, he responded, “Well, crap, what am I supposed to say to that!”

His honest, good-natured humor captured students and visitors alike and made for a night of raucous laughter and fun.

Claire Davenport is a sophomore at Tulane University, majoring in English and political science.