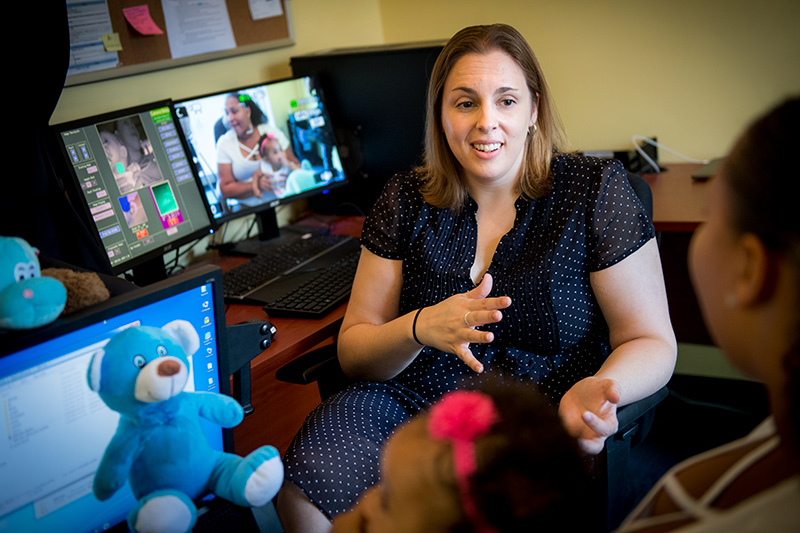 Julie Markant is an assistant professor in the School of Science and Engineering and director of the Learning and Brain Development Lab, where eye-tracking equipment yields clues to how infants learn. (Photo by Paula Burch-Celentano)

A newly published paper co-authored by Julie Markant, assistant professor in the School of Science and Engineering, proposes a new theoretical model to examine the ways infants learn and retain information.

The paper, “Attention and Perceptual Learning Interact in the Development of the Other-Race Effect,” was published in May in Current Directions in Psychological Sciences.

Markant, who runs the Tulane Learning and Brain Development Lab and teaches in the Department of Psychology, and her colleague, Lisa S. Scott of the University of Florida, reviewed existing literature on the face-processing skills of infants. But even though there was plenty of literature to review, there seemed to be gaps — specifically, no crossover between attention, which Markant studies, and perceptual learning.

Babies learn to tell the difference between faces of the same gender and race based on their daily experiences.

The paper’s publication opened Markant’s research up to learn more about the “other-race effect,” an infant’s tendency to recognize a face of his or her own race before a face of another race, an effect that is dictated by experience with the races of the people they most commonly encounter.

“[Existing research] hasn’t said exactly how does this happen, what is the process by which experience becomes encoded or internalized?” Markant said. “That’s where we think attention comes in.”

The lab continues to recruit participants between 4 months and 8 years of age for eye-tracking experiments. The sessions last less than an hour. Interested parents can find out more about the lab and its research and register their child to participate at https://lbdlab.tulane.edu/for-parents/.

Neuroscience and dance set the stage for a career helping others
Tulane University commencement fuses humor, reflection, joy
Ellen honors life of alumnus, and other Tulane news
Mad about mortarboards
2018 Weiss Fellows shine in the classroom