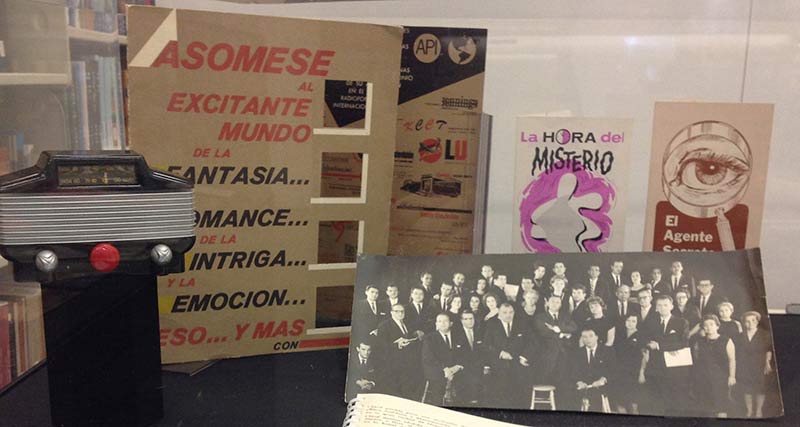 These radionovelas were produced by America’s Productions Inc., a Miami-based company that employed newly arrived writers, artists and entertainers from post-revolutionary Cuba. (Photo from the Latin American Library)

Of the hundreds of new acquisitions at the Latin American Library (LAL) in 2016, Curator of Special Collections Christine Hernández is most excited about a collection of recently digitized, radio-transmitted soap operas from the 1960s.

These radionovelas were produced by America’s Productions Inc. (API), a Miami-based company that employed newly arrived writers, artists and entertainers from post-revolutionary Cuba. In addition to radionovelas, API produced a variety of programs targeting Spanish-speaking radio audiences in the United States, Europe and and Latin America.

“The radionovelas provide an important glimpse into the content and diffusion of Latin American and Latino popular culture at that time,” said Hernández. Of the over 200 titles in the collection, eight will soon be available via the Tulane Digital Library, including one with a James Bond-like theme.

“The radionovelas provide an important glimpse into the content and diffusion of Latin American and Latino popular culture at that time.”

This year’s acquisitions also include more than 3,000 stereoscopic glass slides and other visual materials that comprise the Marcelo Martínez Palma Collection. Martínez Palma was a physician and amateur photographer from Mérida, Yucatán, Mexico.

The majority of the images depict daily life in Mérida between 1910 and 1930. One of the themes particularly well documented in his collection is life on a sisal hacienda, which was the backbone of the Yucatecan economy beginning in the 19th century.

Hernández said that the Latin American Library has been exploring new ways to engage with students, faculty and community members by making events like the annual open house more dynamic and interactive. This year, photojournalist Viki Ospina discussed her collection of photographs on exhibit and how they document the cultural and ethnic richness of her home country of Colombia.

“We want attendees to be able to learn from the people who produce the items in our collections, and really be able to interact with what the library contains,” added Hortensia Calvo, director of the Latin American Library.

The library furthers this goal by hosting speakers and putting on exhibit events as well as providing college and high school class sessions in which students can learn about Latin American history directly from primary source materials.

One of only three standalone Latin American collections at U.S. universities, the Latin American Library contains an extensive circulating collection and special collections holdings that include rare books, manuscript collections, an image archive, maps and ephemera that document the rich history and cultural diversity of Latin America and the Caribbean.