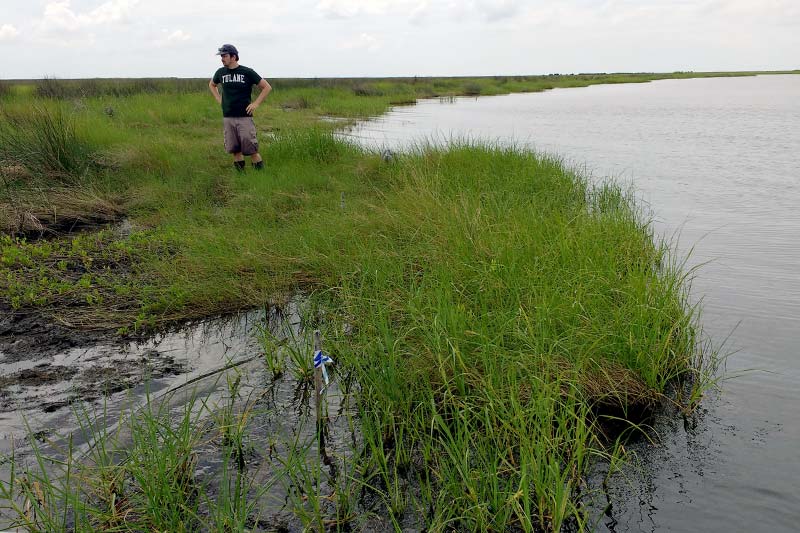 Stephen Formel, a graduate student in the Tulane Department of Ecology and Evolutionary Biology, studies the marsh grass near Barataria Bay. (Photo by Brittany Bernik)

The wetlands are critical to the survival of Louisiana’s coast. Serving as a front-line defense against hurricanes, floods and storm surges, the many species that line the coast have evolved to show resiliency in the face of natural and man-made hazards.

Tulane researchers are seeking to understand that resilience by studying Spartina alterniflora, an iconic species of marsh grass in the wetlands. After the Deepwater Horizon oil spill in 2010, Spartina bore the brunt of the leaked oil, with thousands of acres covered in the sludge.

According to Sunshine Van Bael, assistant professor of ecology and evolutionary biology, Spartina doesn’t just take the punch. Rather, it fights back. With the help of symbiotic microbes called endophytes, microbes that act similarly to gut flora in the human microbiome, bacteria within Spartina tissues may be breaking down the hydrocarbons in oil to render it less toxic.

Aided by a grant from the Gulf of Mexico Research Initiative, Van Bael’s lab has been studying this process using oil samples collected directly from the BP spill. For months, marsh grass seedlings have been growing in dozens of bright orange buckets in the Maple Street Greenhouse near Tulane’s campus.

By measuring the bacteria within the marsh grass and the chemistry of the growing environment, the researchers hope to identify particularly resilient endophytes. The lab has just completed its first round of data collection and hopes to have preliminary results early next year.

The applications for such research could have long-term impacts on the future of Louisiana’s coast, says Van Bael.

“Oil spills will keep happening, unfortunately,” she said. “But it’s good to know what we can do with endophytes. Our goal is to find species that can help these grasses break down oil, and to help these plants respond to stress.”

Read more about the project on the lab's blog.