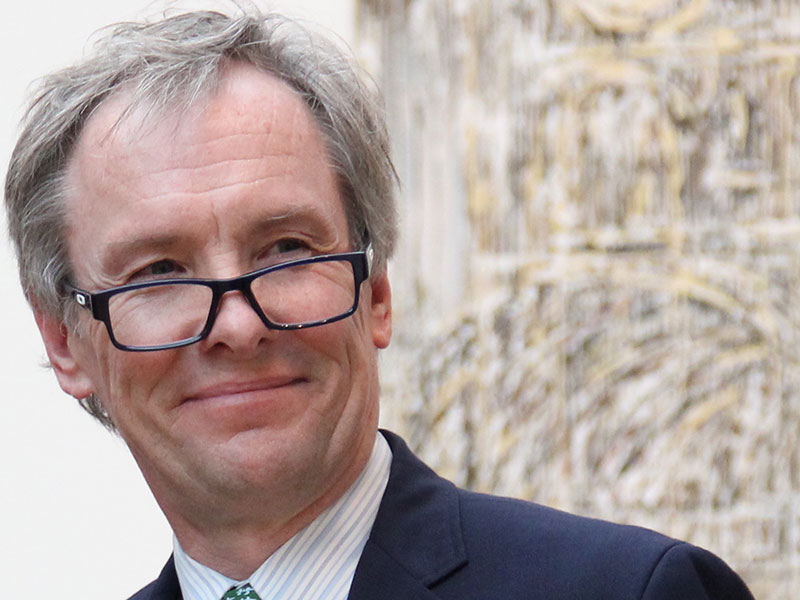 Before computer tablets encouraged us to scribble on touch-screen pages, medieval manuscripts were designed for scholars to write notes in the margins. Some of those manuscripts still exist today, having survived centuries of use, and offering insights into the past.

For more than 20 years, Professor of English Michael Kuczynski of the School of Liberal Arts, has studied a fragile, 200-page manuscript that is as notable for its “notes in the margins” as it is for its main content. This year, Kuczynski published the second of a two-volume set that offers a critical commentary on that manuscript, a “glossed” Wycliffite psalter from the early 15th century.

A psalter is the biblical Book of Psalms, and this version, housed in the Bodleian Library in Oxford, England, is part of the first complete English translation of the Bible. Around the year 1400, followers of the theologian and religious reformer John Wycliffe translated the Bible, including the psalter, from Latin into Middle English, then interpreted or “glossed” the Psalms with some 1,400 opinions derived from Latin commentaries.

“The Bible and the Psalms especially were a kind of encyclopedia of all of the learning, all of the information that one needed to know, not just religious and moral information, but practical information about nature, about life, about the universe.”

It was not uncommon for priests, nuns and some lay people of the Middle Ages to own a psalter. The Bibles of the era were made up of multiple volumes, so Christians were more likely to own the Psalms or perhaps the New Testament, and not only for their religious meaning.

“The Bible was regarded as a very practical book,” Kuczynski said. “The Bible and the Psalms especially were a kind of encyclopedia of all of the learning, all of the information that one needed to know, not just religious and moral information, but practical information about nature, about life, about the universe.”

Scholars don’t know who owned the Wycliffite psalter, although Kuczynski believes its owner may have been an individual who intended to teach or preach from it.

Kuczynski’s new publications, A Glossed Wycliffite Psalter, Volumes 1 and 2, published by Oxford University Press for the Early English Text Society, explore the relevance of the Book of Psalms and its place in church history.

“What I've done is to edit both the Psalms and the commentary on the Psalms. And then much of the second volume provides all the Latin sources for that commentary,” he said, adding that the commentary research involved another 22 manuscripts that were housed at libraries all over England, in the United States and in Ireland.

“When you pursue the study of a manuscript like this, what you’re trying to do is to reconstruct, like an archaeologist, the environment, the context within which this manuscript was written.”

Wycliffe, who was condemned as a heretic after his death, proposed reforming the Catholic church as a movement rather than an institution, emphasizing the “primitive church,” Kuczynski said.

“One of the things the Wycliffites were interested in was trying to divest the church of a lot of the institutional trappings that it had accumulated since the first century, so many of these comments in the margins have to do with Christ as a teacher, his apostles as preachers.”

The Wycliffites used as their source material a Latin commentary by 14th century Franciscan friar Nicholas of Lyra, who knew the original Hebrew and a later Greek translation as well. Multiple translations added another layer of scholarship to the project, which Kuczynski actively worked on for a decade, at times juggling four languages.

“When I was trained as a medievalist in graduate school, the thing that attracted me to manuscript study was this idea of actually being able to be in physical contact with the past, to handle a book that was written and used by somebody in the early 15th century,” Kuczynski said. “I got to the point where I was so immersed in studying this manuscript that I could, almost, imagine myself in conversation with the person who put it together.”

A Glossed Wycliffite Psalter, Volumes 1 and 2, will be available in Tulane’s Howard-Tilton Memorial Library when it reopens. It is also available from Oxford University Press and the Early English Text Society. 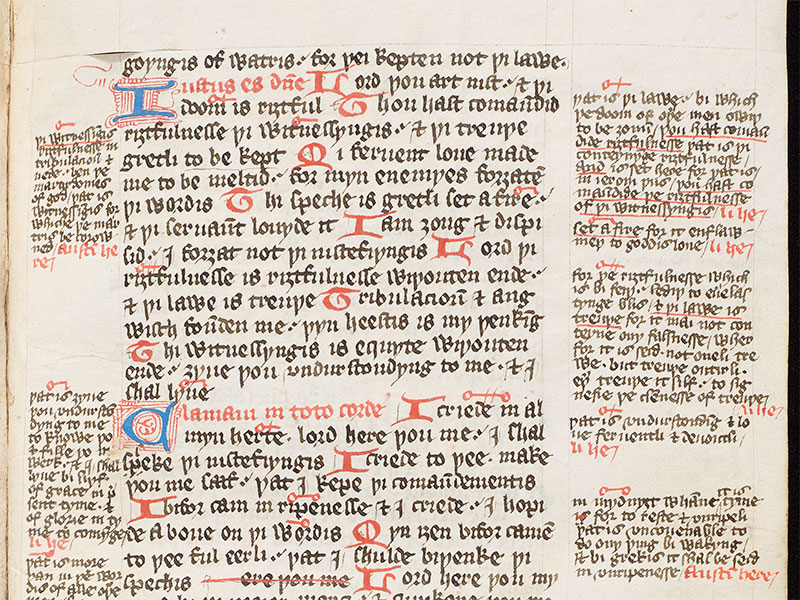 The glosses in the margins of the Wycliffite psalter reveal a scholar’s dedicated study of the content. The page also reflects part of the first complete English translation of a Bible, from around the year 1400. (Photo provided by the Bodleian Library, Oxford)