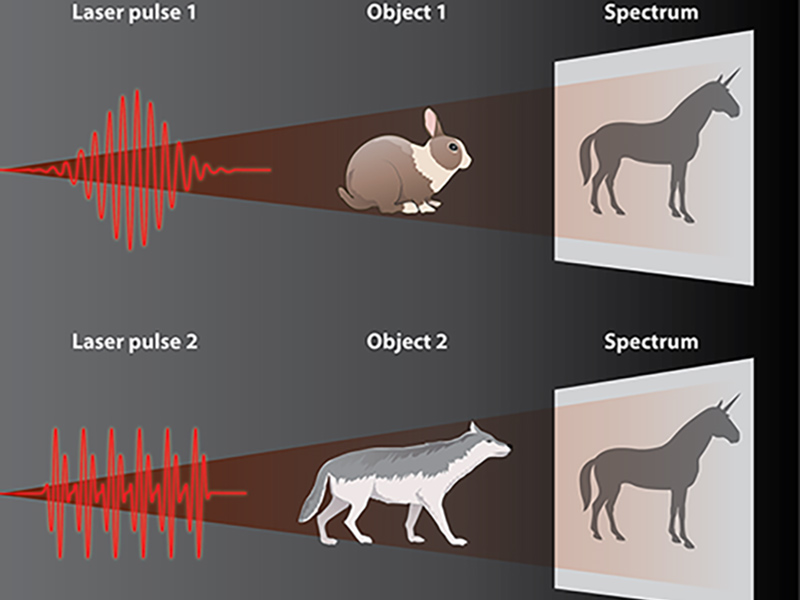 This image illustrates a newly proposed mimicry scheme relating to or derived from the electromagnetic spectrum of visible light by which researchers could make two different materials mimic each other’s spectra — or produce the spectrum of other, more exotic materials. (Image courtesy APS/Carin Cain)

What if a material could be made to mimic another material? That’s a challenge that Tulane physicists Gerard McCaul, a postdoctoral researcher, and Denys Bondar, assistant professor of physics and engineering physics, tackled, along with co-authors, in two papers recently published in Physical Review journals and then highlighted in Physics and PhysicsWorld and Nature Materials.

“For centuries, alchemists sought unsuccessfully to transmute lead into gold,” said Bondar. “But what if, instead of transforming one material into another, we could ‘trick’ the lead into ‘behaving’ like gold?”

In the papers, “Driven imposters: Controlling expectations in many-body systems” and “Controlling arbitrary observables in correlated many-body systems,” the researchers proposed “a method for controlling the optical response of a material that depends non-linearly on its input driving.”

“For centuries, alchemists sought unsuccessfully to transmute lead into gold. But what if, instead of transforming one material into another, we could ‘trick’ the lead into ‘behaving’ like gold?”

Properties such as density or conductivity that differentiate materials are determined by their equilibrium state. But techniques like laser pulses can manipulate materials to alter that equilibrium and change basic properties.

By designing an input laser pulse, “we are creating ‘driven imposters,” forcing materials to behave in a way that we would normally associate with a much different substance,” said McCaul. “This new technique is in some sense a fulfillment of the alchemists’ dream as it is possible to make one material mimic the optical properties of another.”

McCaul went on to say, “The technique presented over the two papers represents an opportunity in both materials science and chemistry to substitute simpler and cheaper compounds that can mimic the desired properties of more expensive materials. In the future, it may even be possible to use the non-linear relationship between input and output to mimic exotic states such as superconductivity at high temperatures.”

Superconductivity is a set of physical properties in certain materials where electrical resistance vanishes. Theoretically, an electric current running through a loop of superconducting wire can carry on indefinitely with no power source.

This research may be useful in developing superconductors, which are vital components of many modern technologies, and are used in everything from hospital MRI machines to the Large Hadron Collider, the most powerful accelerator built to date that allows scientists to reproduce conditions that existed after the Big Bang.

The control technique explored by McCaul and Bondar also has the potential to be used in conjunction with the phenomenon of “high harmonic generation” to reliably create high frequency light.

“This high frequency light would allow experimental physicists to explore the dynamics of systems on much shorter length and time scales than is currently possible,” said McCaul.