The More You NOLA: Parade with the Tulane University Marching Band 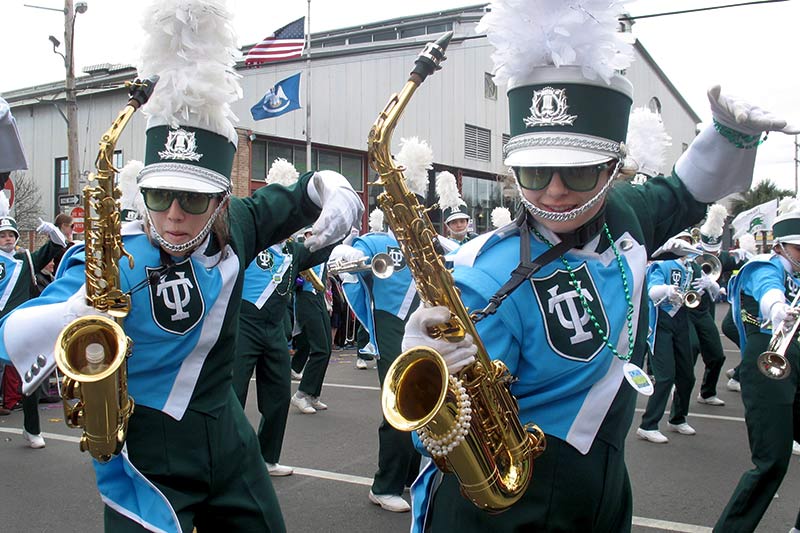 When Carnival season rolls in, the bellowing beat of marching bands provides the pulse for passing krewes. This year, the Tulane University Marching Band will bring its raucous rhythm to four new parades, making its first appearances in Excalibur on Feb. 17, in Nyx on Feb. 22, in Endymion on Feb. 25 and in Orpheus on Feb. 27.

“We’re switching it up this year to play for different audiences and to give the band members new experiences,” said Barry Spanier, director of bands at Tulane University.

“They’re looking forward to marching down Canal Street with Endymion, and now they get to see parades like Rex from an audience’s perspective.”

“We’re switching it up this year to play for different audiences and to give the band members new experiences.”

Spanier has been leading New Orleans’ only collegiate marching band for 13 years.

Since the group’s inaugural Mardi Gras appearance in 2006, the band has grown from 25 students to include about 90 participants who undergo four weeks of training before playing for local parade-goers.

“It’s bigger and better than ever,” said Spanier. “We pride ourselves on our performance the whole way, whether we’re marching to different drum cadences or dancing.”

While serenading audiences with Carnival classics and brass band standards, band members also uphold their own traditions along the route. Their customs include playing the university fight song when spotting a house sporting Green Wave pride, entertaining locals tailgating under the overpass at Lee Circle with the crowd-pleasing anthem “War” and even performing “Happy Birthday” for those celebrating their special day.

To accommodate the band’s larger size, Spanier is also seeking volunteers to walk with the band during parades to help with crowd control and take on tasks like passing out water and carrying banners.

If you’re interested in supporting the Tulane University Marching Band as a Carnival volunteer, please contact Barry Spanier at 504-865-5139 or email bspanier@tulane.edu with your contact information and availability during the parade dates.