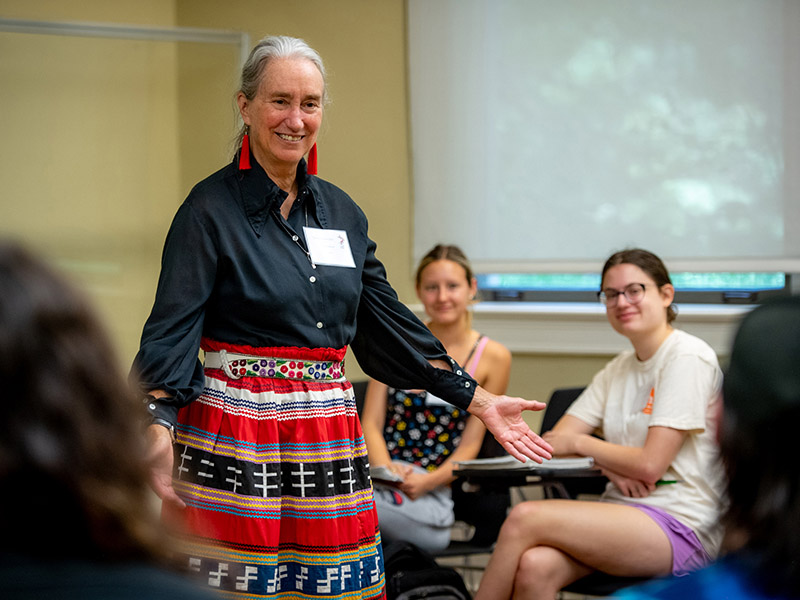 Judith Maxwell, professor in the Department of Anthropology at the School of Liberal Arts, in the classroom with her Tunica language students. (Photo by Paula Burch-Celentano)

Lack of knowledge and understanding as well as misinformation about Indigenous cultures is an ongoing issue for Indigenous peoples all over the world. Judith Maxwell, professor in the Department of Anthropology at the School of Liberal Arts and a member of the Etowah tribe, is making strides in changing this through her work and the program she founded and directs, the Native American Studies Minor.

“There has been an intellectual erasure of Native America. If you talk to most people about Native Americans, they tend to talk about them in the past tense. The message I’m delivering is — we are still here,” said Maxwell. “Native Americans have and are contributing to United States history.”

The Native American Studies Minor grew out of the work that Maxwell has been doing for the past 10 years with the Tunica-Biloxi tribe of Louisiana. When she started the project, Tunica was a “sleeping language,” as it had no Native speakers, despite having a community that identifies with the language and culture. The language is now reawakening, with approximately 80 Tunica-Biloxi children who are learning the language, five adult master teachers and about 20 fluent Tulanians. The two-week summer intensive Tunica course that Maxwell teaches consists of one week of classes on campus and one week working with the tribe.

The minor program requires five courses with at least 60 percent Native American content. Currently there are 30 courses available through the Department of Anthropology and four courses through the departments of Art and Music, but Maxwell would like to grow the program both in scope, such as creating a larger certificate program, as well as the interdisciplinary aspect, with more departments offering courses with substantial Native American content. She now teaches a 1000-level course, Native America: An Introduction, which she hopes will pique students’ interest and lead to further learning.

Maxwell’s purpose and goals are ambitious and are of vital importance to the Native American community. In the classroom, she discusses the constant issues that face tribes all across the country — such as continual threats to Native lands through land-grabbing policies and environmental issues that include mineral rights and management of natural resources on Indigenous territory. By bringing issues to the forefront, Maxwell hopes her students will become conscientious citizens.

“I think that perhaps the most important thing is just the recognition. Because if you recognize that Indigenous people are still here, then you can think about how you interact with them, and what kind of policies you might be willing to support in the future, considering their effect on Indigenous peoples,” said Maxwell.

Acknowledging that the United States was built on Native land is an important first step to raising awareness and visibility. The Tulane Land Acknowledgment was read at the Unified Commencement ceremony and numerous Tulane school ceremonies this May, with Maxwell reading at the School of Liberal Arts ceremony. Maxwell believes that this important first step is leading to further progress for Native American faculty, staff and students, including the formation of an Indigenous student organization and the expansion of the Indigenous Studies Symposium.

“There is a lot to be said for creating spaces in which people can come together. So that is something that we’d like to see. I can bring in people to the course individually, but to bring Tulane in as an institution, so it can become a space, a nexus for this kind of sharing, both with students and with the community, is so important.”