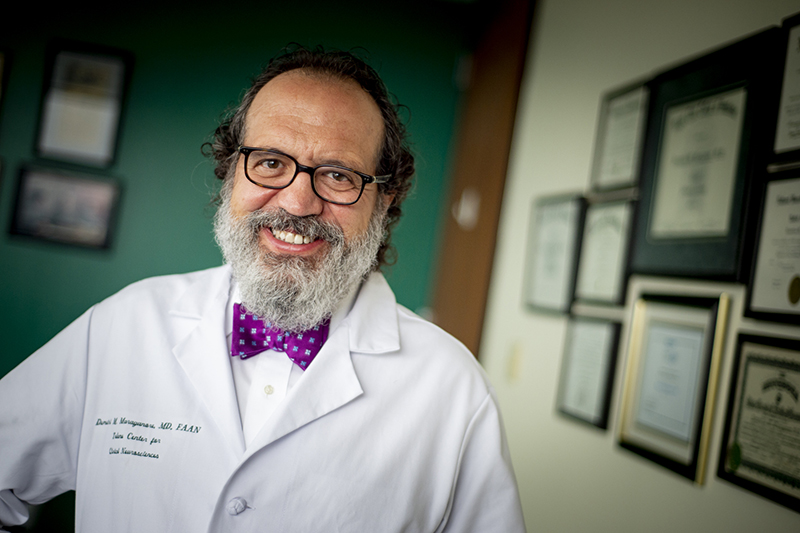 Demetrius “Demetri” Maraganore, MD, is the recently appointed Herbert J. Harvey, Jr. Chair in Neurosciences and Chair of the Department of Neurology at Tulane University School of Medicine, where he runs the Healthy Brain Aging Initiative that helps patients prevent cognitive decline and dementia, including Alzheimer’s disease. (Photo by Paula Burch-Celentano)

More than 5 million Americans of all ages have Alzheimer’s. While deaths from heart disease and cancer have been declining due to treatment advances, deaths from Alzheimer's have grown significantly in the last two decades as more people live longer.

The costs are staggering. Alzheimer’s and other dementias will cost the nation $305 billion this year — and more than triple by 2050, according to the Alzheimer’s Association.

This isn’t inevitable and Americans must do more to protect themselves from dementia as they age, said Demetrius “Demetri” Maraganore, MD, the recently appointed Herbert J. Harvey, Jr. Chair in Neurosciences and Chair of the Department of Neurology at Tulane University School of Medicine.

“We can prevent Alzheimer’s disease. There are about 20 well-defined risk factors for dementia—each at least doubling the likelihood of Alzheimer’s disease,”  Maraganore said. “Yet little effort is being made by health agencies or doctors to create awareness of these modifiable risks, or to identify and address related health disparities. When a disease has modifiable risk factors, it can be prevented by reducing those medical risks. There are also several protective lifestyle and behavioral interventions that can reduce the risk for Alzheimer’s by 50% or more. These include regular aerobic fitness, adherence to the Mediterranean diet, cognitive training and good sleep habits.”

Maraganore, who joined the School of Medicine this summer, is also co-director of the Tulane Center for Clinical Neurosciences and a professor of neurology. He has launched the Tulane Healthy Brain Aging Initiative to help patients prevent cognitive decline and dementia (including Alzheimer’s disease) and to reduce the burden of Alzheimer’s disease and related disorders. The program will lead population health initiatives to identify people at greater risk for cognitive decline as well as serve as a self-referral and physician-referral destination for the evaluation and management of brain health.

Typical patients may include those with a family history of dementia or Alzheimer’s or a known genetic risk for late-onset Alzheimer’s disease. It will also serve those looking to age free of cognitive decline or dementia.

“Our outpatient office evaluations include an inventory of possible modifiable risk factors for dementia, a comprehensive neurological examination to rule out cognitive impairment and the delivery of evidence-based interventions to reduce the risk for dementia,” Maraganore said. “We will order diagnostic studies when indicated. We will also offer genetic testing for late-onset Alzheimer’s disease and provide annual followup evaluations to refine our preventive care plans as needed to early detect and manage cognitive impairment.”

His research projects have included using electronic medical record (EMR) data to predict Alzheimer’s and dementia risks and studying “super agers” who live beyond 90 years old to better understand healthy aging. Using an electronic medical records registry, he was part of a team that identified 45,000 Floridians over the age of 90 who were living independently and free of dementia-related diagnoses.

“Using the EMR we computed a ‘successful aging’ status in the over-90-year-olds. We are in the process of contacting those persons to confirm that the medical records’ estimations of successful aging are accurate, and to invite the successfully aged over-90-year-olds to mail in a saliva sample for DNA studies,” he said. “We hope to find in these persons’ genome the ‘fountain of youth.’ We anticipate similar studies in the state of Louisiana, using a similar electronic medical registry that is available, and similar population health screening approaches.”

A Chicago native, Maraganore received his Bachelor of Science and medical degree at Northwestern University. He then completed his internship and residency at the Mayo Clinic in Rochester, Minnesota. He was then the Honorary Clinical and Research Fellow to Professor C. David Marsden at the National Hospital for Neurology and Neurosurgery in London, England.