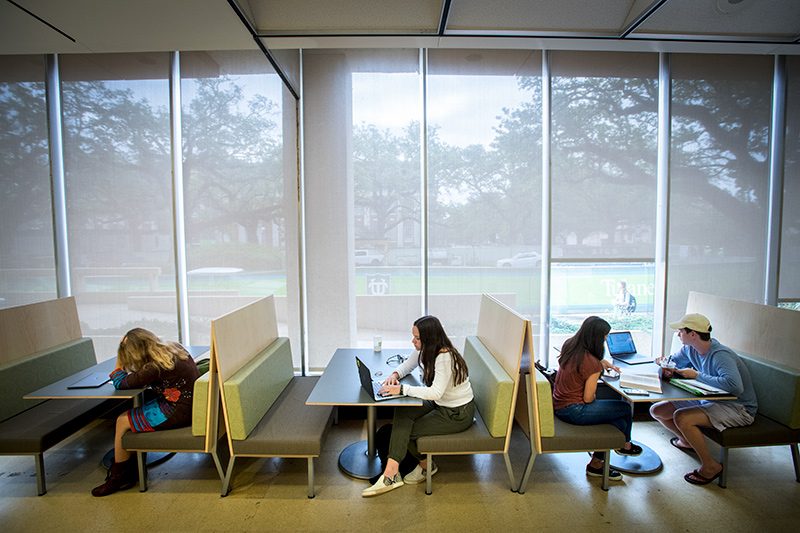 A collaboration between Tulane’s Undergraduate Student Government and the Howard-Tilton Memorial Library led to the creation of 70 new seats and work spaces for students. (Photo by Paula Burch-Celentano)

When Tulane senior Caroline Scott began feeling discomfort while spending long hours studying at Howard-Tilton Memorial Library on the uptown campus, she set out on a mission to improve her fellow students’ studying experiences along with her own.

“I started getting chronic neck pain when I studied, and a way to ameliorate that is to use a standing desk,” said the public health major. “Standing while working burns more calories, is better for your cardiovascular system and has additional benefits.”

“This is proof that students can make a tangible change on campus before they even graduate.”

“The booths located in the PJ’s Coffee on Willow Street are the no. 1 study spot on campus,” said Scott. “I began thinking that this project could be bigger than just standing desks and asked if we could have the same style of booths for the first floor learning commons.”

Scott collaborated with Tyler Margaretten, vice president of finance for USG, to make the project a reality.

“She filed the project as a capital improvement to the university, and, after meeting with the library administration and the USG senate, we approved $86,161 to fund the booth seating and the standing desks on the 4th and 5th floors,” said Margaretten, a finance and management double major.

“The new booths are now fostering group work,” said Mackendrick. “Getting a project like this pushed through during the course of the school year was a Herculean feat, so we’re really excited that we made it happen.”

During the summer, the library aims to add electrical outlets to the booths so that students can charge their laptops.

“When I come in here, it’s such a good feeling when every booth is taken,” said Margaretten. “This is proof that students can make a tangible change on campus before they even graduate.”