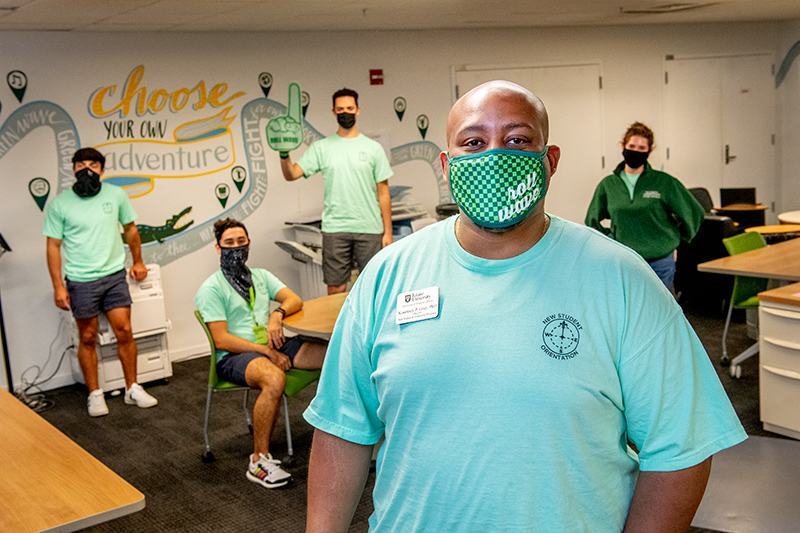 As first-year students arrive on the uptown campus, they will take part in a new format of New Student Orientation Aug. 10-17, 2020. Dr. Kourtney Gray, director of New Student and Leadership Programs in the Office of Student Affairs, said the department usually works with about 100 student volunteers known as Wave Leaders, but this year, the department was able to expand to about 225 student volunteers. (Photo by Paula Burch-Celentano)

Dr. Kourtney Gray, director of New Student and Leadership Programs in the Office of Student Affairs, was a newly minted Tulanian and close to wrapping up his first academic year when COVID-19 prompted the university to suspend on-campus operations early.

By that time, Gray said, the department had already been working on 2020 orientation since the previous fall, but months of uncertainty that followed the nationwide shutdown led to an ambitious and innovative orientation plan for the incoming Class of 2024.

“The biggest challenges were just understanding how do we take some of the things that we used to do in person, and figuring out a way that young college students will be connected or related to it. How do we create a virtual engagement piece that students can facilitate and have opportunities to still stay engaged?” Gray said.

Among the highlights at this year’s orientation is a video Convocation with President Michael Fitts, which will be viewed in small groups throughout the week. Other topics include sessions on diversity and inclusion as well as emergency preparedness. After they move into the residence halls, new students will also punctuate their first week on campus with daily activities and a little free time to explore.

Recreating orientation and managing so many student volunteers — tasks that Gray compared to a “moving target” — were part of a rewarding challenge for the staff of six.

“This is probably the fourth iteration of what we started to develop since March,” Gray said. “The way that my team showed up, especially my Assistant Director Rachel Weber, to be supportive, creative, and to be engaged and do what we needed to do, I’m extremely proud of all of us.”