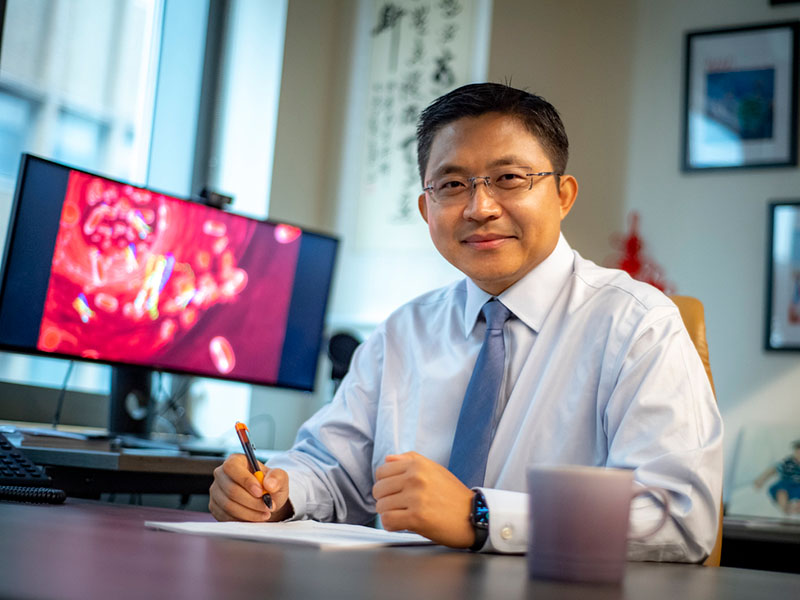 Senior study author Tony Hu, PhD, Weatherhead Presidential Chair in Biotechnology Innovation at Tulane, is working with colleagues to streamline the new TB test so it can be performed in the community and read with a smartphone. Photo by Paula Burch Celentano.

A new blood test developed by Tulane University researchers combines nanotechnology with artificial intelligence to diagnose tuberculosis (TB) in children in instances when the deadly disease might otherwise go undetected, according to a study in Nature Biomedical Engineering.

Although the current test requires a sophisticated lab to perform, researchers are working to streamline it so it can be performed in the community and read with a smartphone.

“TB is a disease found primarily in resource-limited areas, the ideal is to create a smartphone-based method that could be used at the point-of-care in these settings,” said senior study author Tony Hu, PhD, Weatherhead Presidential Chair in Biotechnology Innovation at Tulane University.

TB is the second most common cause of infectious disease death worldwide, having only recently been supplanted by COVID-19.

The disease is particularly deadly in young children, especially those with HIV. Of the quarter of a million children younger than 15 years of age who die from TB each year, more than 80% are younger than 5. In almost all these cases, 96%, had not been diagnosed.

“This is a tragedy because when children are diagnosed and treated, they do well,” said study co-author Dr. Sylvia M. LaCourse, assistant professor in the University of Washington School of Medicine’s Departments  of  Medicine and Global Health. “But we have to find them first.”

The new blood test uses nanotechnology to allow scientists to see even extremely small components of the bacteria that causes TB, a molecule called lipoarabinomannan (LAM) and an associated protein called LprG.

These molecules can be found in the blood of people with TB on small, membrane-bound sacs, called extracellular vesicles. Our cells are constantly shedding such vesicles, which is one way cells dispose of unwanted material. In the case of TB, immune cells, called macrophages, that engulf and attempt to digest TB, shed vesicles studded with LAM and LprG.

“The problem is that every cell in our body produces thousands of vesicles a day,” Hu said. “A blood sample might have billions of vesicles of which only a few hundred will have been derived from TB-infected macrophages.”

To detect these vesicles, Hu and his colleagues coated nanoparticles with antibodies that bind LAM and LprG. If blood contains LAM or LprG vesicles, the antibodies will bind to the molecules, which can be seen under the microscope.

To make the test even more sensitive, the researchers also created an artificial intelligence algorithm that removes any background noise that other substances on the nanoparticle surfaces might cause. This automated process also makes it possible to analyze samples rapidly.

Researchers found that the test was quite sensitive: it accurately detected TB in 89 % of children who were known to have confirmed TB; and identified an additional 74% of children with unconfirmed TB that standard tests had missed

“These initial results are quite promising for the diagnosis of pediatric TB using, small volumes of blood, including among children missed by our typical sputum-based tests. The biomarker levels also went down after starting treatment, highlighting the test’s potential as way to monitor the response to treatment,” LaCourse said.

Researchers are evaluating the assay in prospective studies of children with suspected TB.