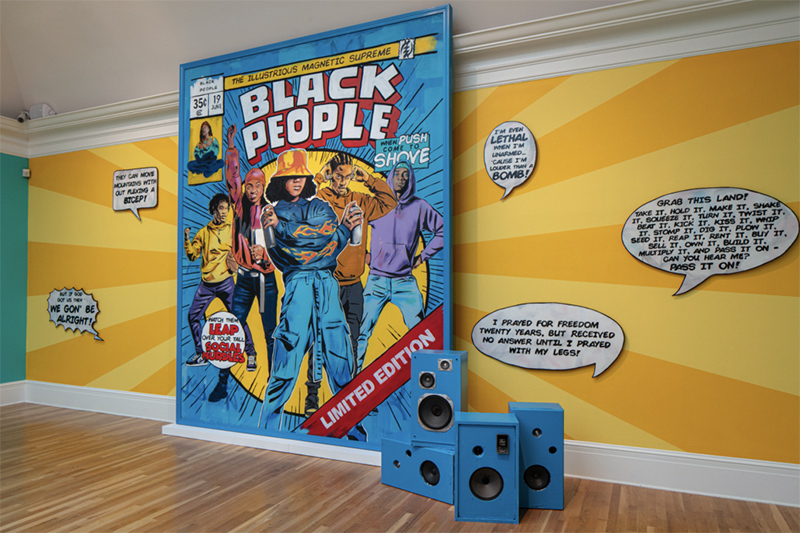 'By Leaps and Bounds: The Evolution of Black Student Activism at TU,' features the voices of current Tulane students and alumni addressing the challenges and opportunities of the present by focusing on past student-led efforts. The discussion was filmed in part with Newcomb Art Museum’s current exhibition ‘Brandan Bmike Odums: NOT Supposed 2 BE Here.’ Pictured is Odums' painting ‘The Adventures of Black People (When Push Comes to Shove)’

Newcomb Art Museum in collaboration with the The Carolyn Barber-Pierre Center for Intercultural Life invites Tulanians near and far to mark this year’s homecoming by participating in By Leaps and Bounds: The Evolution of Black Student Activism at TU, a multigenerational discussion addressing the Black student experience at Tulane. This prerecorded conversation moderated by Sienna Abdulahad, director of Tulane's Office of Multicultural Affairs, features the voices of current students and alumni to address the challenges and opportunities of the present by focusing on past student-led efforts such as the African American Congress of Tulane in 1968, Call for Unity in 2015, the Equity Fee by Les Griots Violets in 2019, and Tulane Takes Ten in 2020.

The conversation premieres at 12 p.m. on Thursday, Oct. 15, on the Newcomb Art Museum’s website and Facebook and will be reaired at 5 p.m. followed by a live Q&A session moderated by Carolyn Barber Pierre at 7 p.m. Interested participants can register for the Q&A via the link here.

Raven Ancar, a third-year student at Tulane featured in the talk and current President of the Tulane Black Student Union, noted the historical arc between the tBSU's current list of demands and the demands of the African American Congress of Tulane in 1968. Raven stated that she continues to participate in events like By Leaps and Bounds because they provide space for dialogue and coalition-building amongst BIPOC students and alumni on Tulane's Campus, and rather importantly, "’affirm that...you do belong here.'”

Another featured panelist, Alexa Authorlee, a third-year student at Tulane and the Founding President of the Alliance of Black Business Students, co-founding president of the Black Queer Collective  and a resident advisor on campus, notes the difficulties that BIPOC students – specifically Black, queer students – face when adjusting to campus life. Alexa states, "one of the things about being a Black student on this campus and specifically a Black queer woman is that sometimes it's hard to find overlap in what you are doing, what you are working towards and who you're surrounded by." Authorlee also works with Tulane's Admissions' team and states that, while the work is challenging, it is worth the reward of supporting and preparing incoming BIPOC Tulane students with openness and honesty.

Registration for the Q&A session can be found via the link here.

Leaps and Bounds was filmed in part with Newcomb Art Museum’s current show “Brandan Bmike Odums: NOT Supposed 2 BE Here”, which uses art to explore such themes as the Black experience and what it means to belong. You can learn more about the exhibition and find out ways to visit virtually here. Questions regarding the exhibition and this program can be directed to museum@tulane.edu.