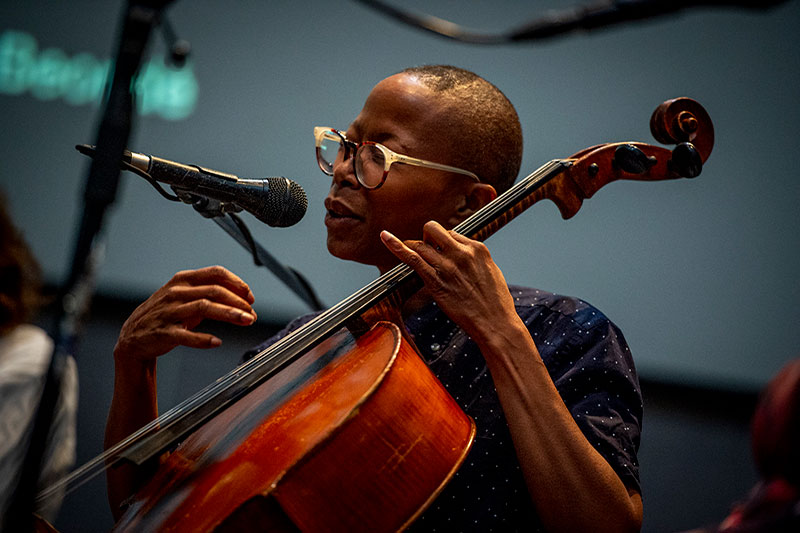 Beginning at 5 p.m. June 19, the museum’s galleries will be taken over by artists, activists, and PerSisters (and some who identify as all three) as they use their performative work to celebrate the stories on view and raise awareness of the stories yet to be told. Pictured is cellist is Spirit McIntyre. (Photo via Newcomb Art Museum)

On Wednesday June 19, Newcomb Art Museum will bring back a variety of artists and collaborators from their current exhibition "Per(Sister): Incarcerated Women of Louisiana" to commemorate Juneteenth and mark the final days of the show. Beginning at 5 p.m., the museum’s galleries will be taken over by artists, activists, and PerSisters (and some who identify as all three) as they use their performative work to celebrate the stories on view and raise awareness of the stories yet to be told. The event is free and open to all.

“We wanted to create a closing event for Per(Sister) that is memorable and impactful,” said Tom Friel, Coordinator for Interpretation & Public Engagement at the Newcomb Art Museum. “Hosting it on Juneteenth, a national celebration of the end of slavery, is intentional, as those affected most by mass incarceration - especially in Louisiana - are predominantly people of color, particularly African Americans.”

The program kicks off with a talk led by PerSister Fox Rich as she informs guests gathered in front of The Life Quilt of the current clemency campaign to free Mama Glo, Louisiana's longest serving mother. The talk will be followed by a freedom-inspired performance - led by Tulane professor Ausettua AmorAmenkum - from members of The Graduates, a performance ensemble comprised of former members of the Louisiana Correctional Institute for Women (LCIW) Drama Club.

Beginning at 6 p.m. guests are invited to take part in a roving series of programs held in the museum’s galleries including a poetry reading from PerSister Chasity Hunter, a musical performance inspired by the exhibition from Spirit McIntyre, and an open exchange about race and ethnicity led by artists Ana Hernandez and Rontherin Ratliff, whose works are on view in the show.

“Juneteenth is a reminder of the strength of millions who have overcome oppression,” Friel said. “I think Per(Sister) is hopeful in many ways. While the themes of the exhibit are very heavy emotionally, the women whose stories are showcased are so strong and incredible. They have thrived despite their experiences, and many have made lasting positive change in their communities, policy, and legislation. There’s no way the museum could honor all of their contributions fully in one evening, but we hope by providing a place for some of the women and artists in the show to expand on their achievements, we can continue the conversation started in the exhibition rather than end it.”

The evening will culminate in a performance and free screening of works, including Fear No Gumbo and Let Me, by Oscar-nominated filmmaker Kimberly Rivers Roberts aka Queen Koldmadina, whose music is also a part of the "Per(Sister)" exhibition.

"Per(Sister): Incarcerated Women of Louisiana" closes July 6, 2019. The exhibition will be available to be seen by appointment only from July 8 through July 20, 2019. More details can be found at newcombartmuseum.tulane.edu.