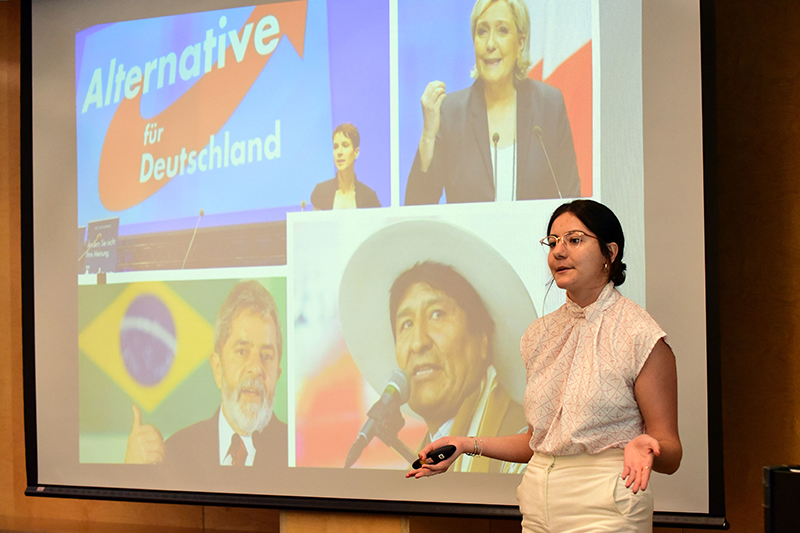 Lipaz Avigal, a political economy major, presented a comparative approach to populist movements in France and Bolivia at the Newcomb Scholars Symposium held on April 13. (Photo by Cheryl Gerber)

“It sounds really scientific, but don’t worry, I’ll explain it all,” said biomedical engineering senior Isabella Johnson before detailing her research on pelvic organ prolapse at the Newcomb Scholars Symposium held on April 13.

The symposium is a highlight of the Newcomb Scholars Program, now in its 10th year, which fosters a unique learning experience dedicated to undergraduate knowledge production. The program’s director, Administrative Assistant Professor Aidan Smith, defined the symposium as “the results of four years of scholarship, study and solidarity.”

Neuroscience major Samantha Perry noted “research isn’t just looking at data points … it’s learning these are people’s lives we’re talking about.” On a panel on global perspectives and community, Kelsey Williams’ evaluation of sexual health programs in Kenya and Lipaz Avigal’s comparison of populism in France and Bolivia challenged listeners to redefine inclusiveness. The event closed with a screening of Juliet Chin’s documentary film, Getting to Know Mr. Chin, an exploration of the Chinese community in Jamaica and its diaspora.

This symposium was particularly poignant after the passing of fellow scholar and friend Margaret Maurer, an ecology and environmental biology major. Williams and Perry, otherwise unfamiliar with ecological degradation, eloquently presented Maurer’s research on threats posed to the precarious land of the Pointe-au-Chien Indian Tribe in southern Louisiana.

Maurer had also led organizational efforts for the symposium since the fall, and Smith noted that the symposium, while bittersweet, honored her memory. “Meg’s vision was to present these projects as a culmination of four years or intellectual rigor and friendship, and I know we fulfilled that goal.”