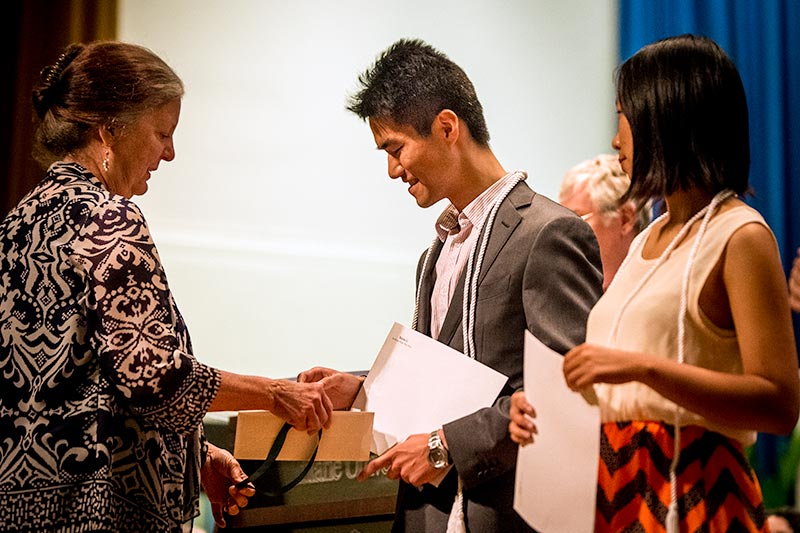 Newcomb-Tulane College announced 15 graduating seniors as members of the William Wallace Peery Society at the Senior Awards Ceremony on May 19.

Established in 1964, the society recognizes extraordinary students who have earned among the highest cumulative grade-point averages over the course of their undergraduate careers while also standing out academically through their honors theses or other projects.

“At Tulane, I was given the freedom to challenge myself within a variety of disciplines and constantly felt supported by the faculty.”

The night’s top honor, the William Wallace Peery Medal for Academic Excellence, went to John Paul Li, who graduated with a bachelor of science degree in physics and mathematics and a bachelor of arts degree in English.

The medal is Newcomb-Tulane College’s most prestigious academic award and is decided by committee. The Peery medalist receives a $1,000 check.

“At Tulane, I was given the freedom to challenge myself within a variety of disciplines and constantly felt supported by the faculty,” said Li, who will start his new position as a software engineer with Google this August.

Originally from Shanghai, China, Li is also a classically trained vocalist and musician. He performed earlier in the evening at the music department’s graduating senior showcase.

“John Paul’s breadth and depth of learning are at a level I have not seen from another student at Tulane since I arrived here in 2005,” said Michael Joyce, professor of practice in mathematics. “He also has an impressive record of service.”

Like this article? Keep reading: ‘Tulane 34’ grows by 34 graduates