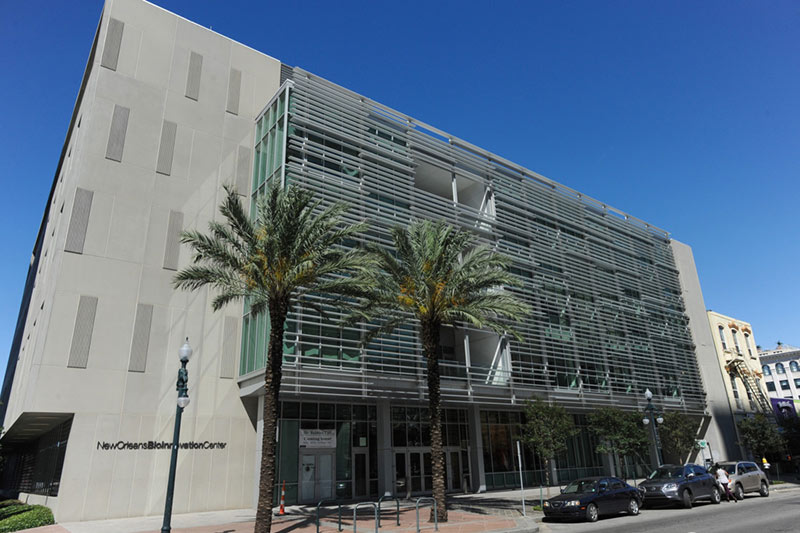 The New Orleans BioInnovation Center (NOBIC) will use a $1.5 million federal grant to create new initiatives to support biotech entrepreneurship and startup growth in the region.

The funding is part of the United States Economic Development Administration’s Build to Scale Venture Challenge program.  The biotech incubator plans to develop new programs to help researchers, including those from area universities, commercialize their discoveries.

The award comes less than a year after Tulane, LSU and the Louisiana Department of Economic Development formed a partnership to reposition NOBIC for long-term success so that it could better compete for the funding needed to move the city’s biotech sector forward.

“At the New Orleans Bioinnovation Center, Tulanians from across our schools of Science and Engineering, Medicine, Public Health and Tropical Medicine, and Business school develop innovative biomedical technologies that may help us prepare for, or even prevent, the next pandemic,” said Tulane President Michael Fitts. “Tulane is working with the Department of Economic Development to ensure the success of the New Orleans Bioinnovation Center. Research universities like Tulane, LSU Health and Xavier generate the innovations that are the basis for future local biotech companies. This will also allow the city to attract companies to do business in—or relocate to—New Orleans. But we want to do more than just attract companies to New Orleans—we want to grow the innovations and businesses built here.”

The program will support entrepreneurs by establishing inroads with local healthcare systems, creating a workforce development program for local students that develops a prospective employee pipeline, and provide fundraising, grant writing, and supplemental operational assistance to the new companies they found.

“By providing Louisiana-based biotech companies with these customized commercialization services, such as assistance with local tax incentive programs and technology assessments, coupled with premier facilities and a comprehensive support network, NOBIC’s efforts are not only dramatically enhancing economic development here in the state, but also improving health outcomes globally,” said Patrick Norton, senior vice president and chief operating officer of Tulane University and chair of NOBIC’s Board of Directors. “The Center will thus be able to expand its impact beyond the 350 innovators who have already received specialized support to create new high-growth businesses such as Advano, Axosim, Fluence Analytics and more that have emerged from Tulane and other local institutions.”

Through this award, and subsequent advancement of Louisiana’s innovation economy, NOBIC aims to create or retain up to 650 jobs and attract $75 million in private capital, said Kris Khalil, BioInnovation Center interim executive director.

“We are thrilled to be receiving this highly competitive award to accelerate not only our state’s technology commercialization activities, but also the specialized job growth in new industries that we so desperately need,” Khalil said. “We look forward to partnering with those in our region who wish to improve health outcomes via integrating advanced technology and novel treatments into our health systems.”

In conjunction with NOBIC’s efforts, Tulane is planning a major expansion in the city’s downtown biomedical corridor. The university is part of a redevelopment partnership to renovate the former Warwick Hotel near the School of Medicine to include 154 apartments for graduate students, researchers, physicians, faculty and other affiliates. Tulane also will play a significant role in the revitalization of the old Charity Hospital, filling a third of its space with laboratories, clinical space, classrooms, student housing and more.