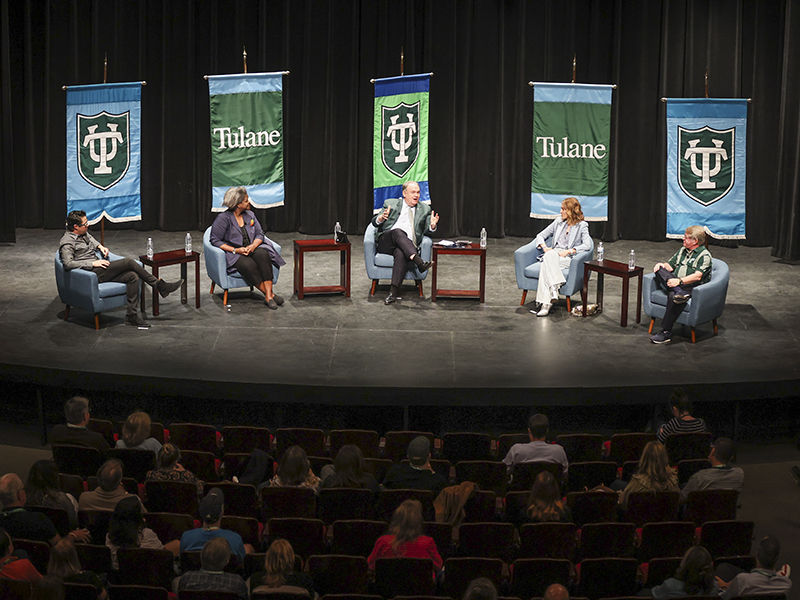 As homecoming weekend got underway, President Michael A. Fitts welcomed four members of the Tulane community who have made significant contributions to the music and entertainment industry. The Presidential Speakers Series: “Notable Tulanians” occurred on Friday, Nov. 12, in Dixon Hall Auditorium, and was an opportunity for Fitts to sit down and talk with Quint Davis (UC ’70), CEO of Festival Productions and producer of the New Orleans Jazz & Heritage Festival; Julie Greenwald (NC ’91), chairperson and chief operating officer of Atlantic Records; Gwen Thompkins (NC ’87), writer, freelance journalist and host of WWNO’s Music Inside Out; and Greg Williamson, co-founder of RWE Partners and creator of the benefit concerts The Tipping Point and Love Rocks NYC.

President Fitts began by welcoming alumni, friends and family back to campus and expressing gratitude for having members of the panel as part of the Tulane community.

“I can’t think of a better introduction for what’s special about Tulane than this panel. It’s an extraordinary group of individuals — we have creators, innovators, and in some sense what we have here are four incredible cultural entrepreneurs. And it’s distinctive of Tulane that we have people like this who are part of our community,” said Fitts.

Fitts began the discussion by asking each of the panelists about the start of their careers and the events that brought them to the positions and the success they have achieved today. All spoke of their love of music, appreciation for the art and craft of musicians, and the desire to share the incredible talent of these artists with the world.

Davis spoke of meeting George Wein, the creator of the Newport Jazz Festival when he was a student at Tulane and said the fact that “the culture of New Orleans was my lifestyle” is what led him to his lifelong commitment to Jazz Fest. Greenwald talked of recreating Atlantic Records “into a fantastic home for some of the greatest artists on the planet that I’m so lucky to work with.”

Fitts commented that there are common themes to the careers of all the panelists, including hard work, a willingness to take risks and having insight into others.

“Your success is dependent upon being able to bring out the best in everybody,” he said.

Williamson spoke about the importance of building an atmosphere that brings about cooperation and a sense of community and the need to “create an environment where people are disarmed and leave their egos at the door.”

Thompkins echoed this sentiment when she talked of interviewing everyone from world leaders to New Orleans musicians. The key to honest dialogue lies in “democratizing, bringing everyone to the same level,” she said.

Davis, Greenwald, Thompkins and Williamson all possess the ability to bring to life the dreams and visions of artists and disseminate this musical artistry for all to enjoy.

“There is something about the culture of Tulane and New Orleans that creates this love and appreciation of music and occasionally produces those that actually change the landscape. This has been a phenomenal panel, needless to say, we all want to be you, but now at least we can live vicariously,” concluded Fitts.