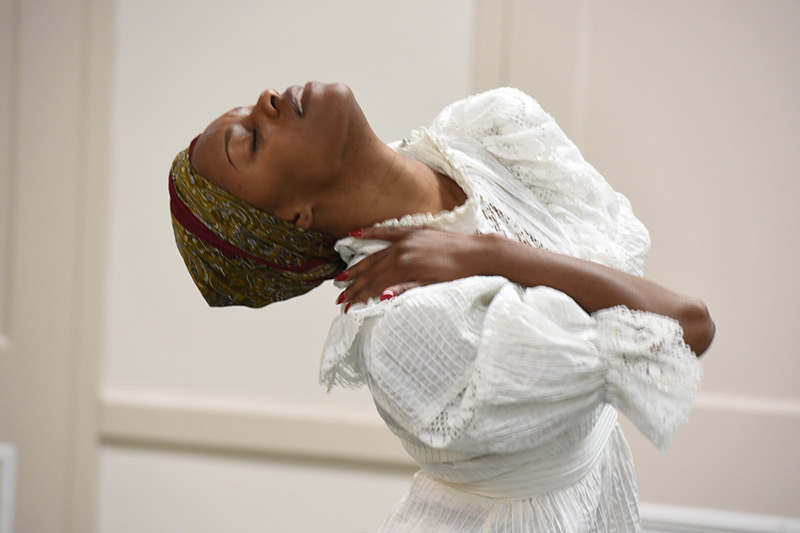 The New Orleans Center for the Gulf South helped highlight the links between the Caribbean and New Orleans during the annual U.S. Department of Agriculture’s Southern Regional Research Center’s Caribbean Cultural Heritage Month in June. The event took place at the New Orleans office of the USDA.

Jarrell Hamilton, a choreographer, African diaspora scholar, and graduate student in the Tulane School of Liberal Arts' Department of Theatre and Dance, performed at the event along with Dominican Republic singer/songwriter and bandleader José Fermín Ceballos.

For Hamilton, exploring these cultural links involves researching the religions of people of African descent and incorporating her understandings into choreography. Hamilton’s performance was inspired by her own experiences of ancestry, memory, dreams and familial roots, as well as the interdisciplinary Introduction to Musical Cultures of the Gulf South course, which she completed last fall.

During the course, Hamilton said she encountered images that inspired her costume design, and she studied the geography, history, music and dance of this region.

“As a child growing up in New Orleans, I learned about the spiritual practices of Vodun and the Lucumí, and I was influenced by these cultures,” said Hamilton. “Learning more about them has helped to define my neo-African spiritual identity and movement.”

For Dominican musician José Fermín, “The similarities of the festive culture and carnival, the warmth of the people, and the communal and joyful experience of music are what the Dominican Republic and New Orleans share.” Fermín discussed the traits that merengue shares with zydeco as an example of the reach of the Caribbean in the U.S. Gulf South.

The New Orleans Center for the Gulf South supports researchers, culture-bearers and community members through fellowships, community engagement and the coordinate major musical cultures of the Gulf South. Michael Watson, food technologist and chair of the Caribbean Cultural Heritage Committee at the Southern Regional Research Center, presented both Hamilton and Fermín with certificates of appreciation and lauded the performances as “an outstanding success.”