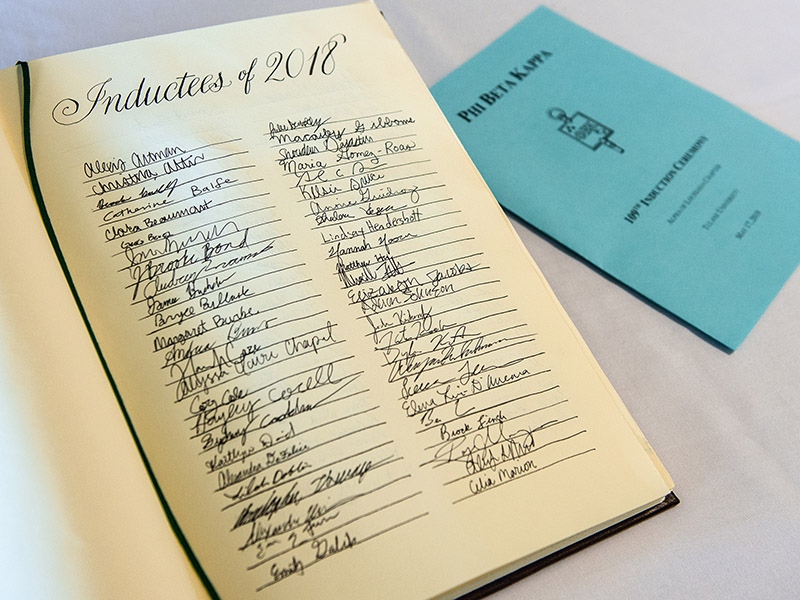 On May 17, an exceptional group of Tulane graduates and juniors became lifelong members of Phi Beta Kappa, the nation's most prestigious liberal arts and sciences honor society. (Photo by Sally Asher)

On May 17, an exceptional group of graduates and a select number of Tulane juniors became lifelong members of the Alpha of Louisiana chapter of Phi Beta Kappa — the nation's most prestigious liberal arts and sciences honor society.

The 109th induction ceremony was held in the Qatar Ballroom in the Lavin-Bernick Center on the uptown campus.

“Phi Beta Kappa recognizes you as outstanding students who have approached your studies not as obstacles but as opportunities.”

— Carole Haber, dean of the School of Liberal Arts

“Today, these 148 members will join 17 presidents, 40 Supreme Court justices and more than 140 Nobel laureates as members of an honor society that recognizes their hard work and their academic achievement,” said Brox.

Only about 10 percent of the university’s liberal arts and sciences graduates are selected for membership into the honor society.

Susann Lusnia, associate professor of classical studies and member of the chapter’s executive board, spoke about the organization’s illustrious history, and Carole Haber, dean of the School of Liberal Arts and Phi Beta Kappa member, delivered the event’s keynote address.

“Phi Beta Kappa recognizes you as outstanding students who have approached your studies not as obstacles but as opportunities,” said Haber. “You have aced calculus while appreciating the importance of art; you have explored neuroscience while composing a musical composition.”

After the group of candidates agreed to uphold the society’s founding principles, including the pursuit of wisdom and freedom of expression, each new inductee was presented with commencement honor cords. Each student also signed their name in the chapter’s new membership roster.

Jake Ward, who received dual degrees in political economy and economics during the Unified Commencement Ceremony on May 19, was also honored as the recipient of the Karlem Riess Memorial Award — a $500 prize.

“One of his professors notes that Jake has written one of the best theses that he’s ever directed, and he embodies the breadth and depth of humanistic scholarship,” said Brox.