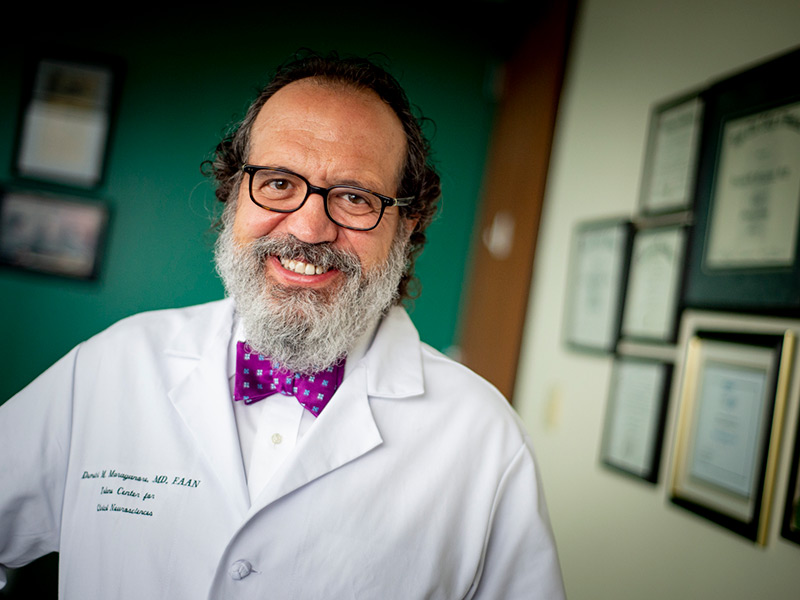 Research shows that some forms of dementia and other kinds of cognitive decline may be preventable with lifestyle modifications, said Tulane physician Dr. Demetri Maraganore, the Herbert J. Harvey, Jr. Chair in Neurosciences and co-director of the Tulane Center for Clinical Neurosciences. (Photo by Paula Burch-Celentano)

Today’s kids are very likely to live past 100 years old. Advances in health care and healthier lifestyles mean the life expectancy of Americans is on the rise. Even so, dementia is also on the rise in this country and worldwide.

Tulane physician Dr. Demetri Maraganore, the Herbert J. Harvey, Jr. Chair in Neurosciences and co-director of the Tulane Center for Clinical Neurosciences, said that some forms of dementia and other kinds of cognitive decline are often preventable with the same advice we’ve always heard — eat healthier, move more. Exercise especially may play a role in preserving brain health.

Maraganore explained how exercise may help. “That does three remarkable things. No. 1, it causes the memory structures in your brain, what we call the hippocampi, to grow in size. People who do exercise literally grow that region of their brain. Secondly, the exercise increases spinal fluid levels of two growth hormones that bathe the brain. And these growth hormones stimulate dormant brain cells to sprout and connect and differentiate. And they also inhibit aging brain cells from dying.

“Thirdly, if you do longitudinal assessments of cognitive function in people who are doing aerobic exercise versus people who are not, the people doing the exercise improve in their cognitive performance. And these studies have even demonstrated the same benefits in individuals who are in their 70s and older, or in individuals who genetically are at greater risk for Alzheimer’s.”

Diet also counts toward brain health. “The Mediterranean diet is the diet of Greece, southern Italy and Spain. And it has been shown to not only reduce your risk, at any age, of death by 50% — heart disease or stroke or cancer. But it also reduces your risk for dementia by 50%.”

Maraganore cited a trial in Spain that monitored individuals who were obese or had heart disease, hypertension, diabetes or high cholesterol. These individuals were randomized to either strictly adhere to the Mediterranean diet or eat as they preferred.

“What they found was astounding,” Maraganore said, noting that every year, measures of global IQ, memory and executive decision-making skills incrementally improved for individuals who strictly adhered to the Mediterranean diet. “Aerobic exercise and the Mediterranean diet: They don’t just protect your brain from aging effects, but they restore your brain to youthful health.”

The majority of Alzheimer’s cases come from genetic risk factors, though. While it’s not possible to change a person’s genetic makeup, attention to lifestyle factors may nonetheless reduce the risk.

The physician and his team have identified a number of other health factors, some of which a person can change themselves, even if they already have other dementia risk factors.

“It’s never too late,” Maraganore said. “The evidence shows that if you change your exercise habits, your dietary habits, and if you address your health factors, that can make a huge difference.”

To hear more from Tulane’s Dr. Maraganore about achieving better brain health in the golden years, listen to him being interviewed on the On Good Authority podcast.