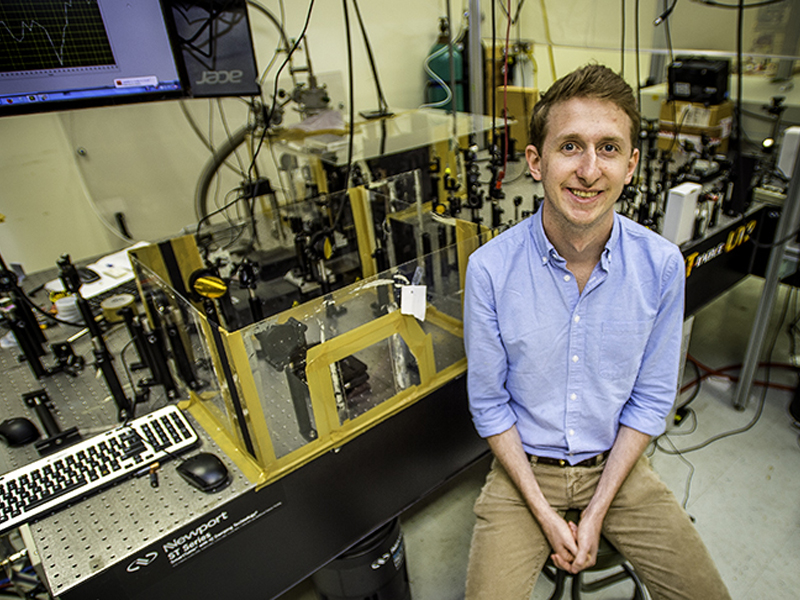 Skylar Deckoff-Jones turned his undergraduate research into a published paper before he graduated. (Photo by Ryan Rivet)

In August 2012, as a freshman from Santa Fe, New Mexico, Skylar Deckoff-Jones never expected to be a role model to those involved in the science and research departments at Tulane University.

Later, Deckoff-Jones authored a publication that consists of his research on the nonlinear optical properties of ultrathin crystals. “The fact that I’ve contributed new knowledge to the scientific community is one of my proudest moments from my time at Tulane,” he says.

Previously, as the recipient of the prestigious Goldwater Scholarship as a sophomore, Deckoff-Jones received an amazing opportunity to embark on a two-month internship through Research Experience for Undergraduates in Okinawa, Japan. Having discovered a passion for Japan and also for his extensive research, Deckoff-Jones decided to take a semester off and continue his studies in that country for eight months during his junior year.

“Tulane has given me incredible research experiences, and from that, I have learned so much.”


For the past four years, Tulane Department of Physics professor Diyar Talbayev has served as a mentor for Deckoff-Jones; the two have been working in tandem throughout his collegiate career.

“It has been amazing to do actual research in a lab with a professor who has been there throughout the years. Tulane has given me incredible research experiences, and from that, I have learned so much,” Deckoff-Jones said.

Deckoff-Jones had a tough choice when it came to choosing a doctorate program. He was accepted into the Massachusetts Institute of Technology, the University of California–Berkeley and Columbia University.

Confident in his choice to pursue material science and engineering at MIT, Deckoff-Jones hopes to “contribute more knowledge to the scientific community. I hope that my research can be involved in real world applications and will make way for the creation of new technologies.”

Melissa Felcher is a sophomore studying communication at Tulane University.

Cafe Istanbul hosts HOPfest, a celebration with a cause
Grad focuses on cancer research
Protect your skin from the summer sun
The green party
‘It’s never too late’