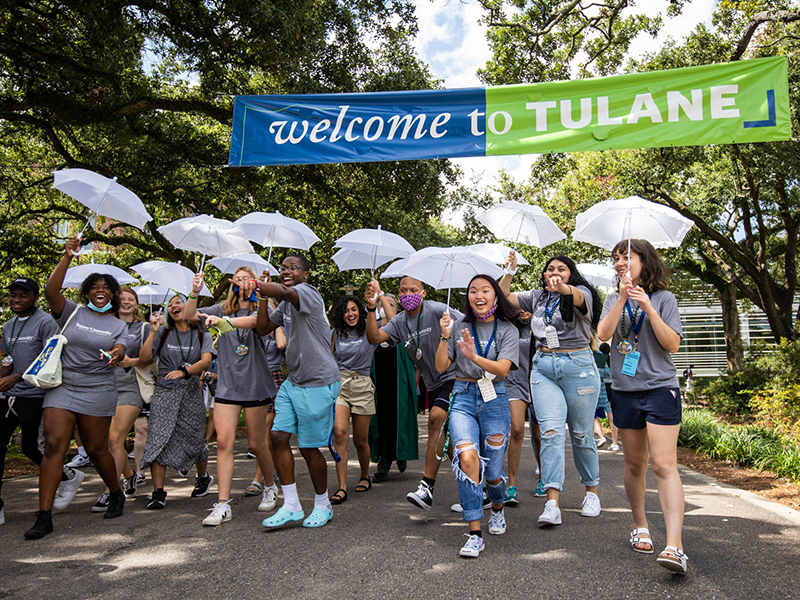 First-year students with second-line umbrellas make their way down McAlister Drive after the 2021 President’s Convocation for New Students on Aug. 19. (Photo by Rusty Costanza)

Tulane University welcomed almost 2,000 first-year students and 100 transfer students on Aug. 19 at the 2021 President’s Convocation for New Students, the first official event for the Class of 2025, as newly minted Tulanians. Gathered under a sign that read “Your fuTUre starts here,” the students experienced a friendly welcome to start their college career.

With music, fanfare and high spirits, President Michael Fitts opened the academic year with an address to the new Tulanians in Avron B. Fogelman Arena in Devlin Fieldhouse.

(Photo coverage of the event can be found here).

Marking their new journey as Tulanians, the students received Tulane T-shirts, Mardi Gras beads from Newcomb-Tulane College in celebration of the college’s 15th anniversary, second-line umbrellas and a goodie bag including a Tulane applique and a pin. Since 2020, it is tradition for students to decorate their second-line umbrellas, adorning it with memories they create over the course of their time at Tulane. Students can then bring the umbrella to their Commencement ceremony. The students’ first applique given at Convocation was embroidered with Tulane’s motto “Non sibi, sed suis.”

Satyajit Dattagupta, senior vice president and dean of admission for enrollment management and graduate and pre-college strategy, reflected on what brought the class to Tulane.

“There is no ‘perfect’ college, there is no ‘perfect’ student — but there's something called a ‘perfect match,’” Dattagupta said. “I truly believe that for the right kind of student, there is no journey like the one you will get at Tulane University. For being in college, the next four years cannot be just about checking those boxes. College has to be a time where you take risks, where you question the status quo. … So use these next four years to transform yourself, to ask those difficult questions and become a better version of you.”

President Fitts then took the stage to welcome new students to their new home. Fitts opened by stating the class had already been described as “unprecedented” before their arrival, noting that they were probably tired of hearing the word; however, he noted, their triumphs during the past year should be recognized.

Fitts celebrated the fact that the students were in person to experience Tulane and New Orleans mostly firsthand. He mentioned there is much to discover from events like the New Orleans Book Festival at Tulane University, Green Wave games in Yulman Stadium and life-changing lectures, as well as those everyday things that make the Tulane experience special.

“They are all the result of living, learning, working and growing side-by-side. Our community is more than our campus and more than our city — it’s the magic that happens when we’re all here together,” Fitts said.

Acknowledging that students have mostly been living in a “virtual world,” Fitts discussed the origin of memes — accompanied by a light-hearted and humor-filled slide presentation that touched on Drake, “The Fast and the Furious,” and U.S. Sen. Bernie Sanders, among others — and explained that the term was coined by biologist Richard Dawkins.

Fitts went on to say the concept was a combination of biology and anthropology, and since then, the concept has gone “viral.”

“Anyone can make good things happen — but it takes a combination to make something great, and that is the genius of Tulane’s culture,” he said. “You find it in our research. In our social engagement. In our community service. That’s why we have more joint majors than any other school in the country — we’ve seen what’s possible when disciplines collide,” he said.

He reiterated that Tulane encourages the opportunities to study, collaborate and connect across disciplines and backgrounds. “Making friends with people who are very different from yourself is one of the unique gifts of college — and here at Tulane, we specialize in creating those experiences,” he said.

Fitts referenced UCLA Law Professor Kimberlé Crenshaw, who previously spoke at Tulane about intersectionality and the importance of observing those intersections in one’s self and others.

“Without applying that lens, equity cannot be fully present. At Tulane, our goal is to cultivate a culture of respect, genuine curiosity and a healthy sense of humility. We aim to foster a community that maintains equity, diversity and inclusion at the heart of everything we do,” Fitts said.

He noted we are all connected by the COVID-19 pandemic experience.

“But most important are the ways we interconnect — how we take our talents, our stories, and ourselves—and combine them with the people around us. That’s how you innovate creatively.

The Tulane University Marching Band performed a musical interlude, which was a preview of their Green Wave football half-time show.

Following the band’s interlude, Robin Forman, senior vice president for academic affairs and provost, also addressed the new class. Forman explained the importance of what it is to experience a liberal, or freeing, education at an institution like Tulane. He reminded students to share their authentic selves in the process.

Lee Skinner, dean of Newcomb-Tulane College, also took the stage and encouraged students to seek out the courses, programs and faculty that will challenge and delight them. She shared that Newcomb-Tulane College and Tulane have a plethora of resources to support students in their academic journey so that they not only succeed, but that they thrive. Additionally, she charged the incoming class to lead with confidence, humility and spirit and to educate their whole selves during their time at Tulane.

Fitts concluded the event by inviting new students to participate in his annual Instagram photo challenge and leading the “Roll, Wave!” cheer. Then the students put the novelty umbrellas to use — in many cases participating in their very first second-line as Tulanians. They exited the building through a gauntlet of cheering Tulane Marching Band members and Wave Leaders lined up on McAlister Way, and went forth to begin their academic careers.