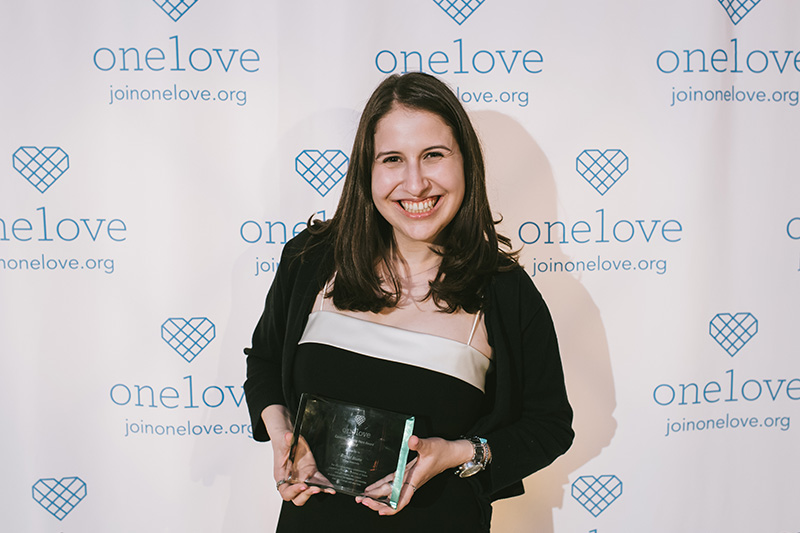 Rachel Blume receives the Campus UnSung Hero award during the One Love Foundation gala in New York City. The recognition is for Blume's work leading campus programming that promotes healthy relationships. (Photo from One Love Foundation)

Rachel Blume, a student in the Tulane School of Liberal Arts, was recently awarded the Campus UnSung Hero award from the One Love Foundation for her work leading campus programming around healthy relationships and relationship violence.

Blume, who is a junior studying political science, international relations and social policy and practice, directs a team of undergraduate students in facilitating workshops to train participants in identifying unsafe or concerning behavior in romantic relationships.

Blume draws on educational modules provided by the One Love Foundation, an organization that was founded after the death of Yeardley Love in 2010. Love was killed by an ex-boyfriend weeks before her graduation from the University of Virginia.

“Through the testimony at her ex-boyfriend’s trial, people realized that everybody had seen some sort of behavior that was concerning, but they just didn’t know what they were seeing,” said Blume. “The organization started to work towards creating a curriculum that helped people become aware of these behaviors and intervene.”

Blume founded a chapter of One Love at Tulane and has since held educational workshops with over 20 student groups.

“I always tell people the best way to intervene is to continue to be supportive, to use the ‘I’ voice, and to judge behaviors, not people,” said Blume.

In the future, Blume hopes to grow the programming offered by the Tulane One Love chapter and get more students involved.

“One Love is holistic. It is preventative, instead of reactive,” said Blume. “We’re working to plan trainings for all the athletic teams and I would love for these programs to be done at freshman orientation. I think the sooner you reach people, the sooner you can make a difference.”