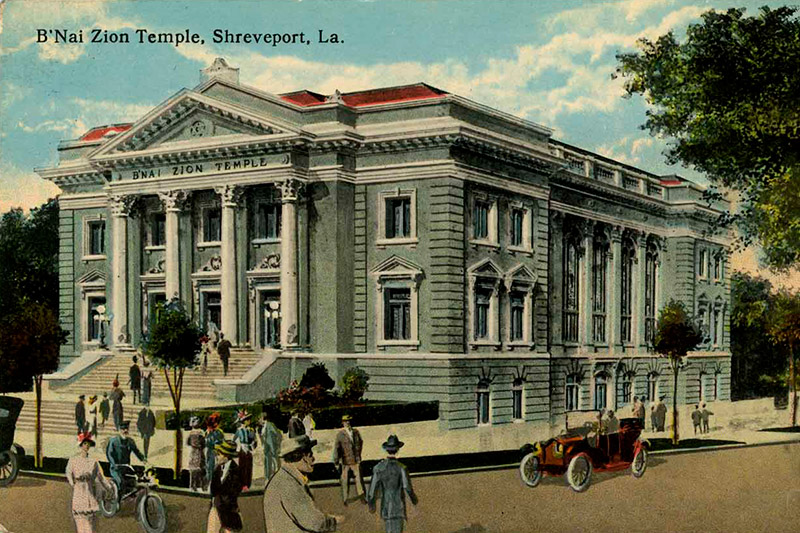 As part of the “Privilege and Prejudice: Jewish History in the American South” seminars, participants will learn about religious histories, Jewish economic activities, and the role of food in the Southern Jewish experience, among many other topics. B’nai Zion Temple, of Shreveport, LA, is pictured here with a group of worshipers. (Courtesy of Special Collections, College of Charleston Libraries)

Michael R. Cohen, professor and chair of Jewish Studies in the Tulane University School of Liberal Arts, is helping shape the field of Southern Jewish history.

Cohen was awarded a $143,700 grant by the National Endowment for the Humanities that he shares with Jewish studies experts from the College of Charleston (CofC), where the workshop – Privilege and Prejudice: Jewish History in the American South – will be held May 27 — June 7, 2019.

The grant is part of the NEH’s Summer Seminars and Institutes for College and University Teachers program, which brings college and university faculty members together with the nation’s leading experts to engage in study of significant topics in the humanities.  Summer scholars will be selected through a rigorous application process.

“Privilege and Prejudice” will offer in-depth training in southern Jewish history for 25 educators from across the country at the Pearlstine/Lipov Center for Southern Jewish Culture (CSJC), based at CofC. Cohen serves as co-director of the program along with Shari Rabin, assistant professor of Jewish Studies at CofC and Dale Rosengarten, associate director of the CSJC and founding director of CofC’s Jewish Heritage Collection.

During the two-week program, participants will explore such subjects as religious history of Southern Jews, the relationship of Jews to slavery in the antebellum era, Jewish economic niches, immigration and the role of Jews in the civil rights movement. Other topics include Jewish/Christian relations and the role food has played in the Southern Jewish experience.

“Southern Jewish history is an important story, not only because of the many contributions that individual Jews have made to the South, but because their experiences are a window into the dynamics of race, diversity, tolerance and prejudice in the region,” said Cohen, who holds a Sizeler Professorship in Tulane’s School of Liberal Arts.

He said he is grateful for the opportunity to “bring together a diverse group of leading scholars to explore new approaches to the field of southern Jewish history.” Building upon the momentum created by the Museum of the Southern Jewish Experience’s move to New Orleans, Cohen said the seminar has the power to move Tulane to the forefront of an emerging field.