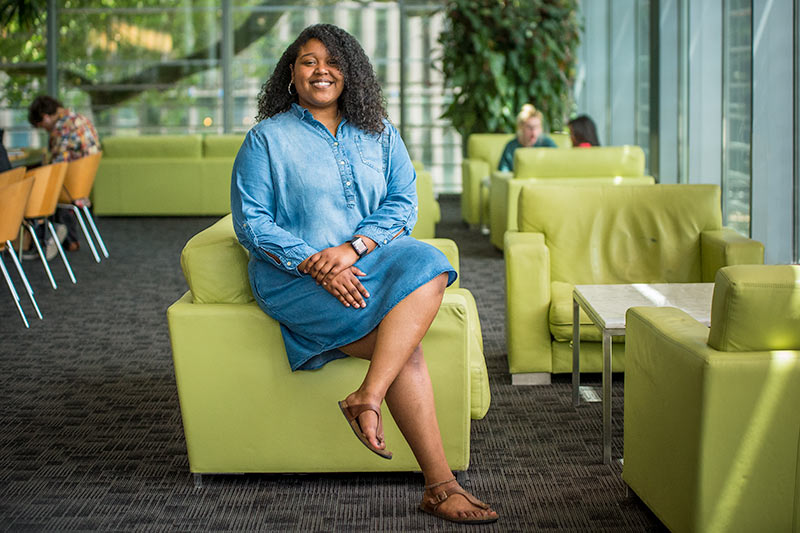 Kayla Jackson is the winner of the 2017 Jim Runsdorf Excellence in Public Service Award for her work with Herstory NOLA, a workshop storytelling program for local middle and high school students. (Photo by Ryan Rivet)

Kayla Jackson’s passion for storytelling has been the driving force behind her undergraduate career at Tulane University. Jackson, who will graduate in May, put her efforts into the the local organization Herstory NOLA and toward working on her novel-in-progress.

“Storytelling is about the attainment of your voice in whatever way you see fit,” said Jackson. “It was important for me in learning my craft, developing as an artist and a person, and telling my story in ways that were unique to me.”

This spring, Jackson will graduate from the School of Liberal Arts with a bachelor’s degree in English and will continue her graduate studies as a master’s degree candidate in Tulane's English 4+1 program this fall.

“Storytelling is about the attainment of your voice in whatever way you see fit.”

She is the 2016 recipient of the Trailblazer Award and the winner of the 2017 Jim Runsdorf Excellence in Public Service Award for her work with Herstory NOLA, a storytelling workshop for middle and high school students, and for her involvement as a community engagement advocate with the Center for Public Service and with the Tulane Black Student Union.

As a junior, Jackson helped rebrand the existing program NOLA Digital Girls with a new set of ideas and goals, creating Herstory NOLA, which now focuses on storytelling through a variety of media, and improving skills in writing and critical thinking.

“We started focusing on how could we make this program more meaningful,” said Jackson. “How does your identity fit into the story you are telling: Would the story be the same if you were of a different race, religious background, or a different gender, sex or sexuality?”

After graduation, Jackson hopes to create a nonprofit organization in the model of Herstory NOLA that expands the offerings of the current program.

In the meantime, Jackson is working on her own writing by crafting a novel set in her hometown of New Orleans.

“The book is a good mix of fiction and poetry,” said Jackson. “It’s something that I’m really excited about.”

The 2017 Commencement ceremony will be streamed live online. Follow us on social media at #tulane17.