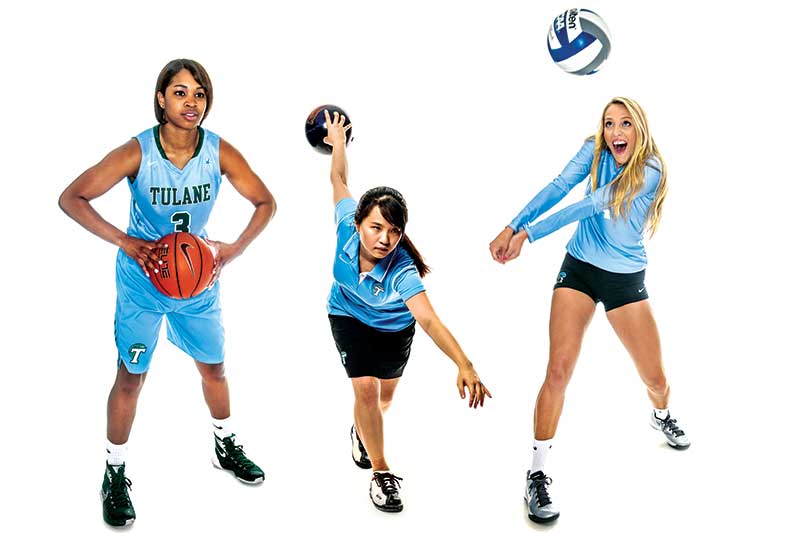 Junior basketball player Kolby Morgan, junior bowler Michelle Ng and senior volleyball player Sarah Strasner say that the sacrifices they make as student-athletes are ultimately worth it for the love of their sports. (Photos by Paula Burch-Celentano)

It’s a hot, sticky Monday morning in late August. Senior volleyball player Sarah Strasner rolls over in bed to silence the alarm set on her iPhone: 5:20 a.m. Today is the first day of her final year at Tulane, and though classes have barely begun, Strasner already has the first tournament of the season under her belt. Most days begin with a slap of the clock, but she can’t snooze too long: Workouts start in 20 minutes, and coach Jim Barnes doesn’t handle tardiness well.

The schedule for any student-athlete can be tough to manage at best, grueling and disheartening at worst. Not many college students see 5 a.m. from this angle: Some are crawling into bed as Strasner’s alarm is going off.

“You need a lot of perseverance and joy, because if you’re not happy doing it, you can’t do it,” Strasner said. “Time management and your work ethic have to be very good. You always have to be giving 100 percent every day for both school and sports. It’s so competitive.”

EXCELLENCE ON THE PLAYING FIELD

In the 2015–16 academic year, over 120 women donned the olive and blue to represent Tulane University on the NCAA scene, participating in nine varsity sports from August to June. These student-athletes brought home a slew of individual titles, breaking both personal and school records along the way and representing Tulane in an exemplary manner.

Track and field stars Lilla McMillan and Jasmine Blocker, who graduated from Tulane in May 2016, recently competed in trials for the Rio de Janeiro Olympics.

Want to keep reading? Click here for the rest of the story.