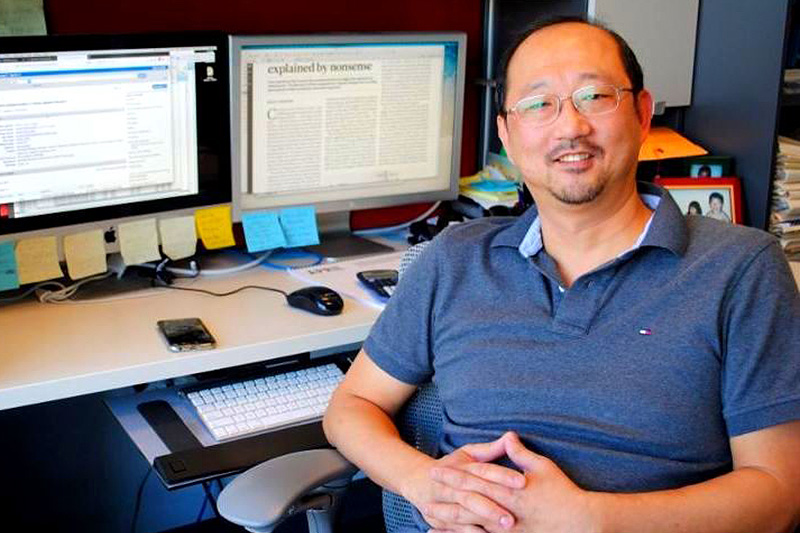 Sean Lee, PhD, associate professor of pathology in the Tulane School of Medicine, was recently awarded a $1.8 million grant from the National Cancer Institute to identify new targets for the treatment of desmoplastic small round cell tumor, a rare pediatric cancer.

DSRCT is a type of soft-tissue sarcoma that causes multiple tumors to form, most often in the abdomen and pelvis, but it can also occur in other parts of the body. A few hundred cases have been diagnosed since the first case in 1989.

“Part of the reason that the first case was officially diagnosed relatively recently is that we didn’t have the technologies that would allow us to detect DSRCT in the ’70s and ’80s,” said Lee. “As the technology became available, researchers were able to identify specific events called chromosomal translocations that cause these types of cancers.”

A chromosomal translocation is when parts of chromosomes swap places in the genome. “The translocation brings gene A and gene B from totally different chromosomes and fuses them into a single protein called an oncoprotein,” said Lee. When that happens, most of the time cells die. But in rare cases, they survive and go on to become cancerous tumors. “And this fusion protein is not very responsive to therapy.”

Lee's project focuses on other proteins called kinases, which are tumor-driving byproducts of the oncoprotein and are responsible for tumor cell growth and survival.

“These kinases are equally as important as the oncoprotein for cancer cell development, but they are amenable to therapy, so we can theoretically develop inhibitors to target them,” said Lee. “We’re trying to show through this research that if we inhibit these kinases we can kill the tumor cells in a petri dish.”

If his team is successful, they’ll move on to a pre-clinical mouse model. Lee will then use pharmacologic or genetic tools to inhibit kinase function in those cells to determine whether they can shrink the tumors or retard their growth. The longer-term goal is to potentially move the concept into pre-clinical trials for humans.

Boys and young men are about four times as likely to have DSRCT as girls or young women. It is usually diagnosed in males between the ages of 10 and 30, and about 85% of those diagnosed are Caucasian. Currently, DSRCT has a five-year survival rate of only 15%.