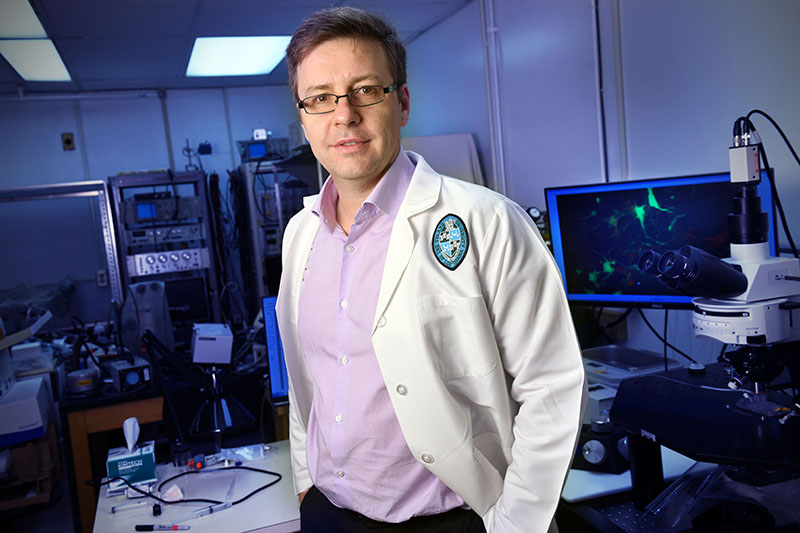 Andrei Derbenev, associate professor of physiology, is investigating the role of the brain in hypertension and the possible mitigating effects of cannabis for hypertension treatment. He is on the research advisory board of the newly formed Brain Institute at Tulane. (Photo by Cheryl Gerber)

Hypertension — or high blood pressure — is a long-term, high-risk condition for millions of people worldwide.

At the moment, synthetic beta-blockers are one of the most common drugs prescribed to treat hypertension.

Cannabis “has lots of different chemicals inside. Some of them are painkillers. Some of them, we don’t know what they are doing.”


But what if a natural drug, marijuana, which has been known for 5,000 years, could be used in the treatment of high blood pressure?

Andrei Derbenev, associate professor of physiology in the Tulane University School of Medicine, recently received a four-year, $1.5 million research grant from the National Institutes of Health to study how cannabinoids — the compounds of cannabis (another name for marijuana) — affect a brain stem area involved in blood pressure control.

His research may have important clinical applications for the treatment of hypertension.

Cannabis “has lots of different chemicals inside. Some of them are painkillers. Some of them, we don’t know what they are doing.”

People ask Derbenev all the time: Is marijuana good? Is it bad? But the debate, he says, should be, instead, “Which works? Which does not work?”

About a decade ago, Derbenev led a study about the effect of cannabinoids on the parasympathetic nervous system, the part of the autonomic nervous system that stimulates the body to “rest and digest.” In that investigation, his team showed the mechanism by which cannabis can reduce digestive spasms and thus decrease vomiting. It’s a finding of great interest to cancer patients experiencing nausea while undergoing chemotherapy.